“Pointless” you say? Touché… Even before the pandemic had kneecapped much of their business, Japanese taxi companies have long embraced novel theme cabs as a way to drum up extra business. From sleeping beauty taxis to instant noodle cabs, there have already been scores of creative ideas touring the streets. They usually have some underlying […]

“Pointless” you say? Touché…   Even before the pandemic had kneecapped much of their business, Japanese taxi companies have long embraced novel theme cabs as a way to drum up extra business. From sleeping beauty taxis to instant noodle cabs, there have already been scores of creative ideas touring the streets. They usually have some underlying logic. For example, Kit Kat taxis were deployed during university entrance exam season because the candy bar’s name sounds a lot like the Japanese phrase for “certainly succeed” (kitto katsu). And then there are some that feel logic is overrated, such as Fencer Taxi. This service began on 19 April and charges a base fare of 5,500 yen (US$50) for the privilege of been driving around by a guy in full PPE – fencing PPE that is, not the other kind you always hear about in the news. 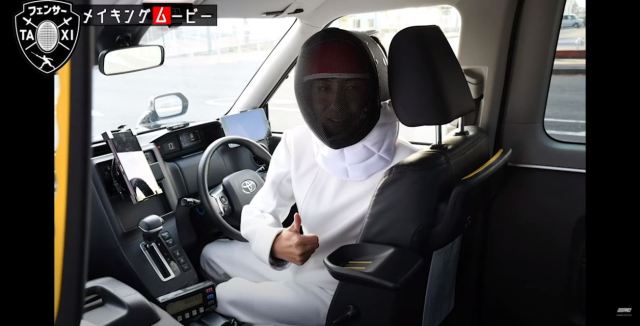 It should be noted that the driver is a professional taxi driver, not a professional fencer, though it’s probably best that way. That being said, the driver is quite knowledgeable in the ways of fencing and can answer your questions about the sport to some extent. He will also treat passengers with all the grace and civility of a proper man of arms. 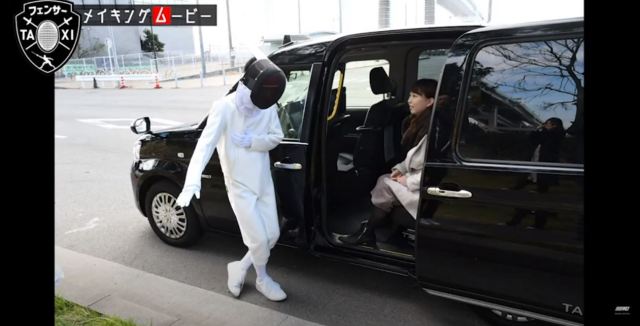 By now you might be thinking, “this is certainly pointless,” and not even know how right your are! Thanks to Japan’s stringent sword control laws, it’s very hard to prowl around the city with a replica épée, foil, or sabre, let alone a real one. So Fencer Taxi took a real foil and cut off the blade so that it literally “has no point” at all anymore. Just how difficult it is to cut one of those things can be seen in the following making-of video. So it would seem for the whole ride, you just kind of have to imagine the blade. However, during trips that cover the Tokyo, Kanagawa, and Saitama area, if at some point the driver doesn’t check the oil and then do a few fancy moves with the dipstick, it’d be a huge waste. 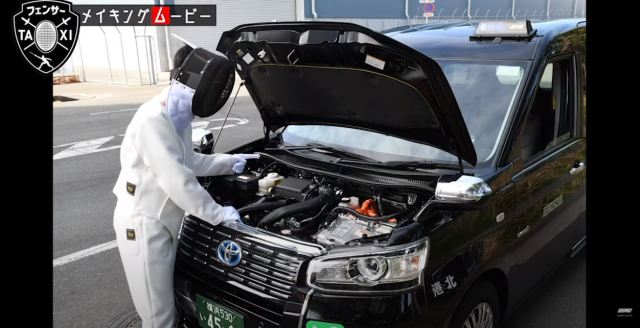 There are also other services such as bottled water, umbrellas, and facemasks sold at nominal prices. The driver will also be more than happy to pose for photos for people who want to post on social media which really seems to be the target market that Fencer Taxi’s parent company Sanwa Kotsu is lunging for with all this. 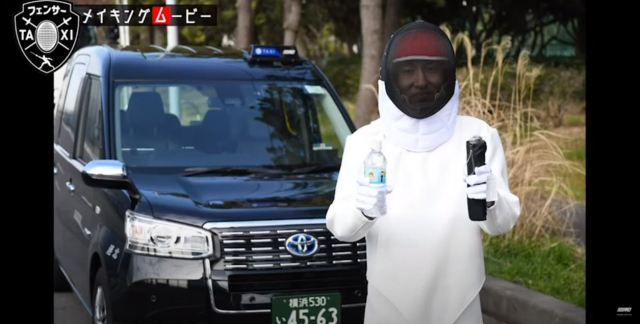 It’s also a nice little way to get into the spirit of the Tokyo Olympics, that will probably…maybe happen soon. Considering how hard it’s been to do that recently, every little bit helps. Source: Sanwa Kotsu, PR Times, Netlab Top image: PR Times Insert image: YouTube/三和交通 ● Want to hear about SoraNews24’s latest articles as soon as they’re published? Follow us on Facebook and Twitter!