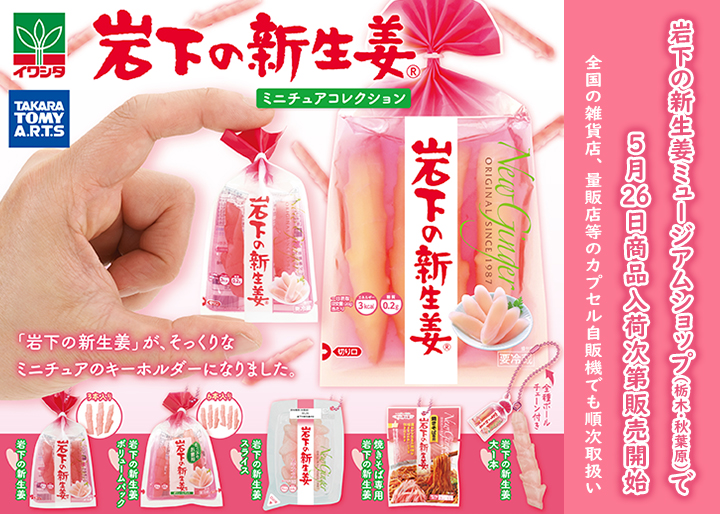 Wear your love of pickled ginger on your sleeve, bag, or keys with new capsule toy line 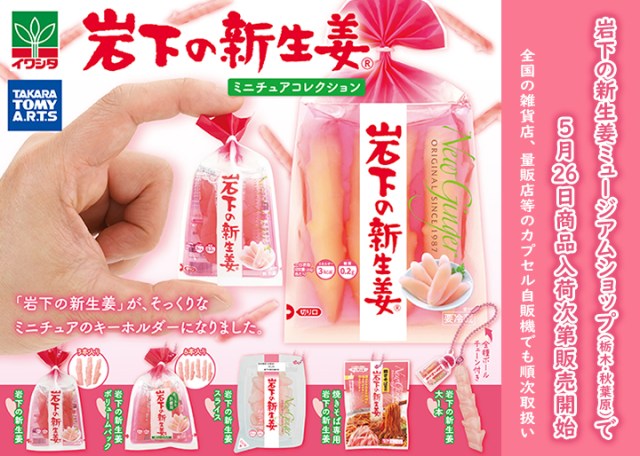 A giant in capsule toys teams up with a giant in pickled ginger for the first time ever.   Who doesn’t love pickled ginger? What with its sweet yet spicy taste, bright pink color, and arguably erotic appearance. Among its many makers towers Iwashita Foods and their notorious Iwashita New Ginger brand of ready-to-eat girthy stalks. Iwashita New Ginger has really overachieved when it comes to merchandising pickled ginger too, having released penlights, smartphone accessories, pink curry, and giant mascot heads. But like they always say, you haven’t really made it in the pickled side dish game until you’ve been featured as a capsule toy. So, it’s with great fanfare that the Iwashita New Ginger Miniature Collection has been developed, answering the age old question of what various Iwashita products would look like at two-fifths their original size! 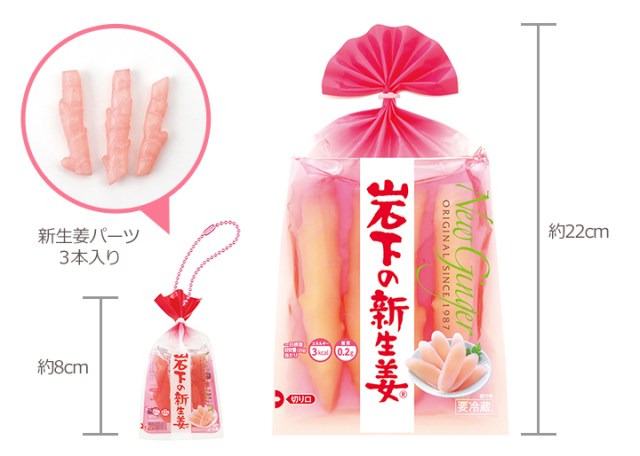 The standard sack of ready-to-eat ginger sticks has been recreated in meticulous detail, right down to the barcode, tearable notch in the bottom corner, and three removable miniature sticks of ginger. They even have a pink-colored chain in keeping with the overall aesthetics. 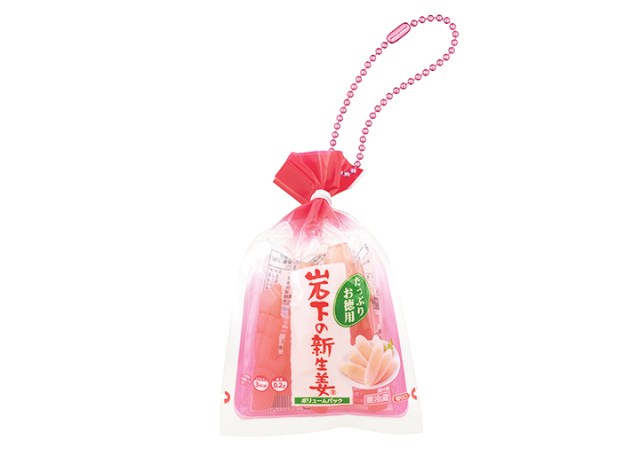 If you’re really lucky you might end up with a Volume Pack that has six sticks instead of three. 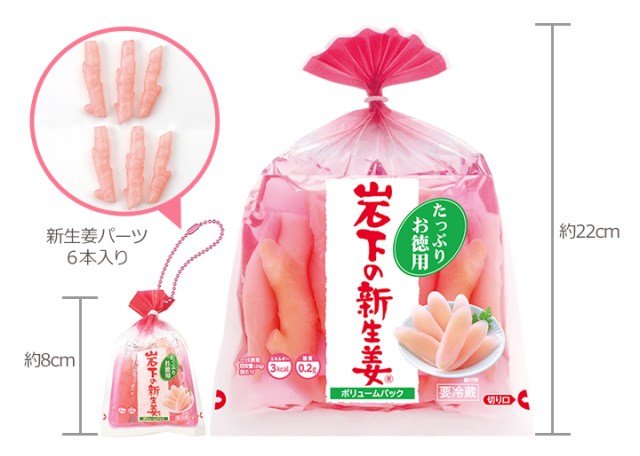 However, especially busy people might not be able to enjoy Iwashita New Ginger, with all the draining and peeling that goes into preparation. That’s why they also came out with a vacuum-sealed pre-sliced version, both in reality and the miniature world. 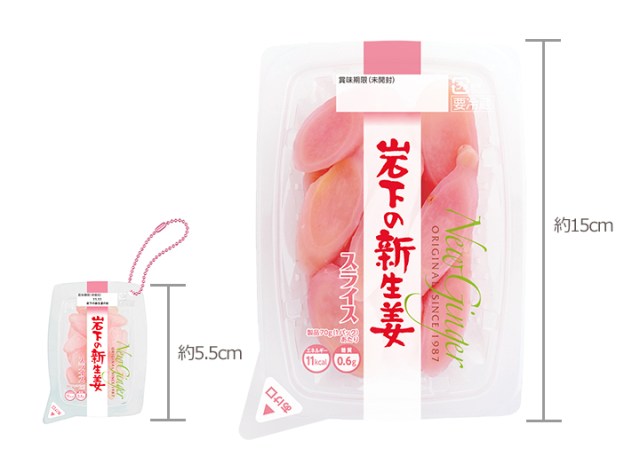 For lovers of hearty dishes like katsudon or yakisoba, there’s also the julienne sliced Iwashita New Ginger. Although these slender sticks of ginger annoy me to no end when I need to reheat the dishes they garnish without burning them to a smelly mess, they are tasty…and now small enough to fit into your pocket! 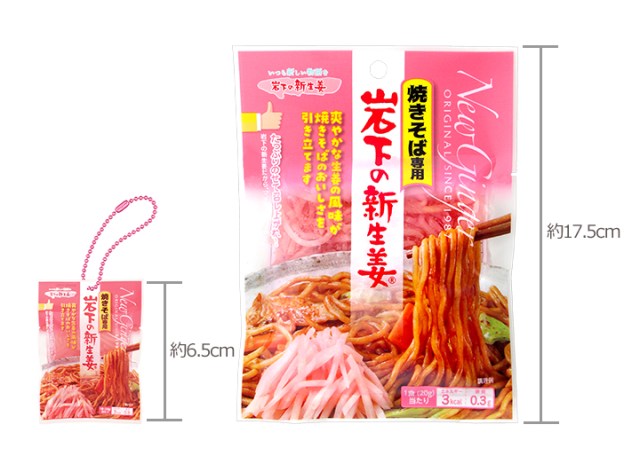 While the highly-detailed packages are novel, there’s no doubt a group of people who just enjoy the pure visual pleasure of a single stick of Iwashita New Ginger without all the trappings of modern commerce. For these people, there is the one ginger miniature at half the size of a regular stick. 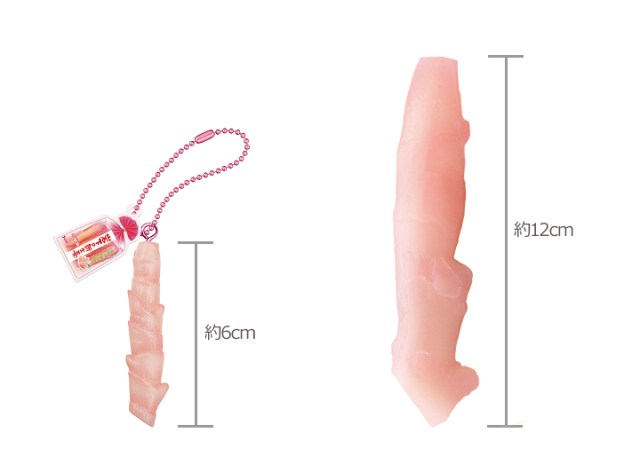 All miniatures were designed and produced by none other than Takara Tomy Arts, so you know they’re worth the 300 yen (US$2.76) for a turn at the capsule machine. In fact, Iwashita New Ginger is currently ranked 4th in the company’s customer-interest ranking. They will be released first at the Iwashita New Ginger Museum in Tochigi City and store in Akihabara on 26 May and then will gradually roll out to machines all over Japan.

If you too want a considerably smaller looking bag of pickled ginger sticks or slices, you better act fast. Capsule toy collectors can be a ravenous bunch and easily pick a peck of pickled ginger pronto. Source: Takara Tomy Arts, @Press Images: @Press ● Want to hear about SoraNews24’s latest articles as soon as they’re published? Follow us on Facebook and Twitter!