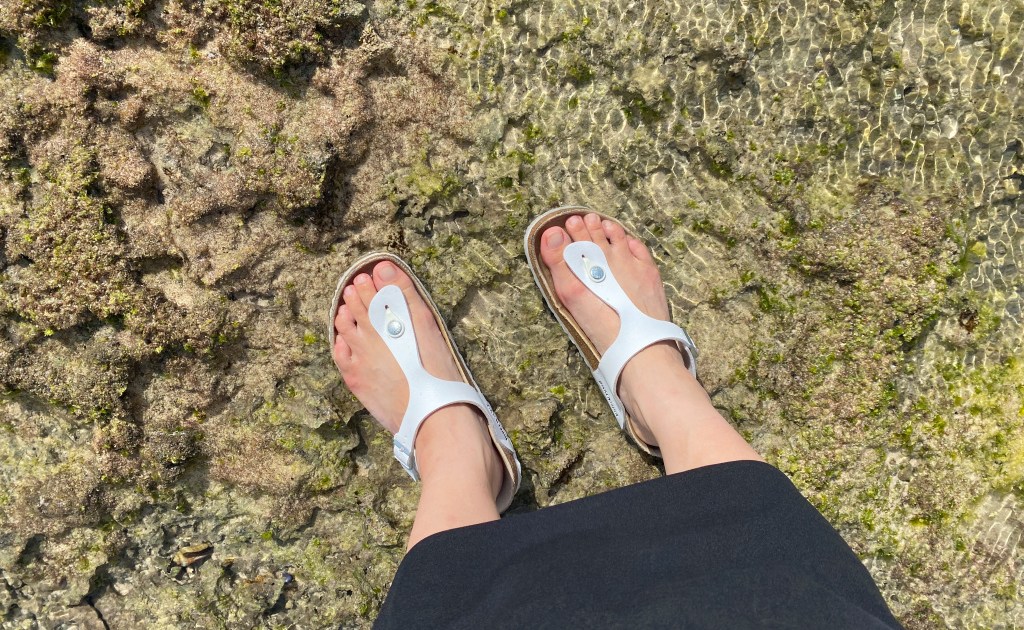 The party was a far cry from what our reporter had envisioned, but it was just as satisfying in its own way. Our travel and food-loving Japanese-language correspondent Ikuna Kamezawa had a memory of someone telling her that Okinawan people don’t actually go swimming in the ocean very much, despite living in such close proximity to […] 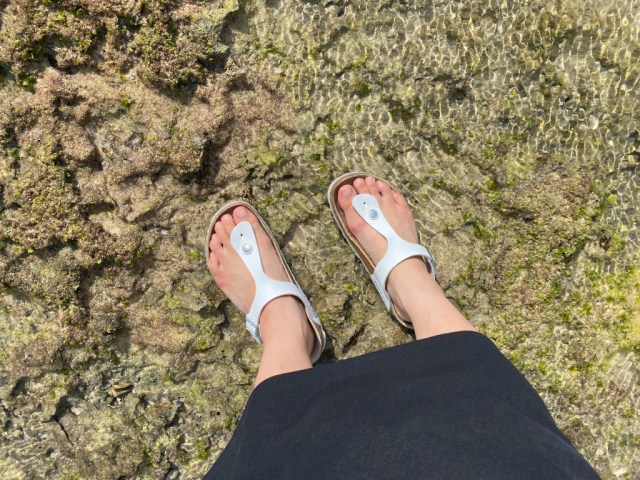 The party was a far cry from what our reporter had envisioned, but it was just as satisfying in its own way.   Our travel and food-loving Japanese-language correspondent Ikuna Kamezawa had a memory of someone telling her that Okinawan people don’t actually go swimming in the ocean very much, despite living in such close proximity to it. When she was recently in Okinawa, she ended up asking about 10 locals to see if there was any truth to that statement. The majority of their responses indicated that it wasn’t that they never went swimming, it just wasn’t very often. Furthermore, the ones who did occasionally go for a dip said that they didn’t usually make a production of it by planning ahead and wearing a swimsuit but donned a casual t-shirt instead. However, what really piqued her curiosity was when she followed up by asking them if they just weren’t all that interested in the ocean to begin with–to which they overwhelmingly responded by saying that they in fact visited the water quite often. If they weren’t going to the ocean for swimming, then what were they there for?

▼ A “welcome to Okinawa” sign in the local dialect 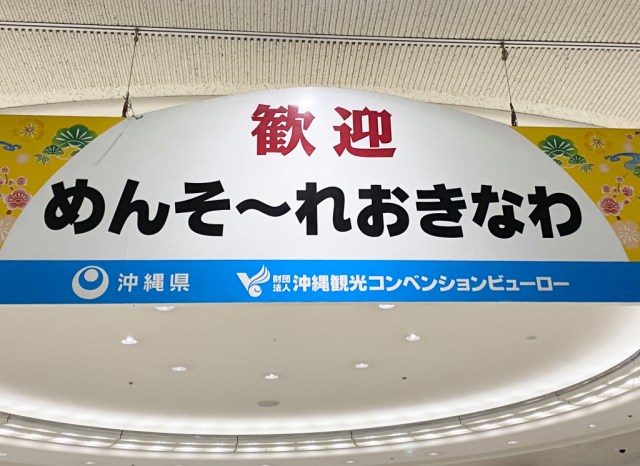 The answer turned out to be a unanimous “to have a beach party.” In Ikuna’s mind, a “beach party” was something that involved loud music, lots of overly enthusiastic young people, and bottles of popping champagne. Was an Okinawan beach party along similar lines, or did it include some kind of spiritual connection to your ancestors, traditional instruments such as the three-stringed sanshin, or the kachashi folk dance? She would never get any answers by pointlessly mulling it over by herself. As luck would have it, one of her local friends then offered to invite her to a beach party the following day. What good timing! She was touched by the kind gesture. The next day the two of them stopped by the supermarket on their way out to grab some ingredients for a simple barbeque. 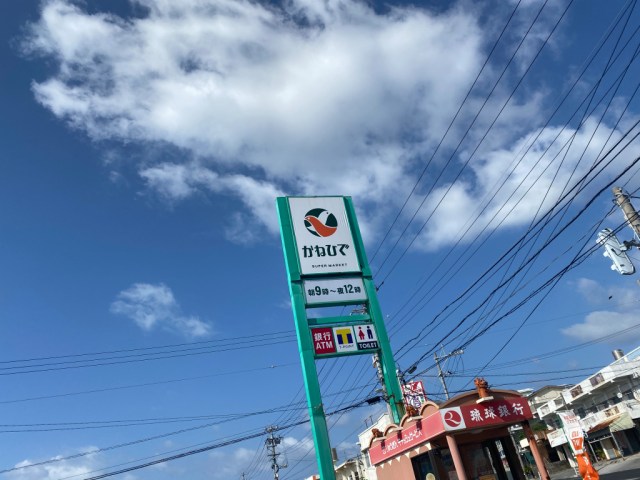 In the checkout line, Ikuna noticed how few foods they were actually buying for a “party.” Was this going to be the type of shindig where everyone brought a little something, potluck-style…? 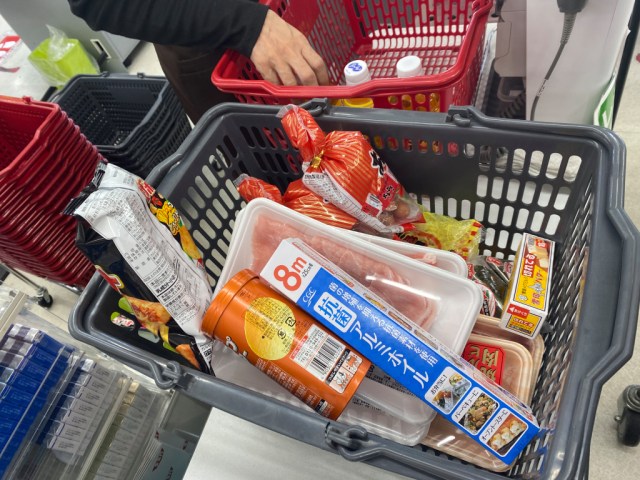 ▼ All packed up and ready to go 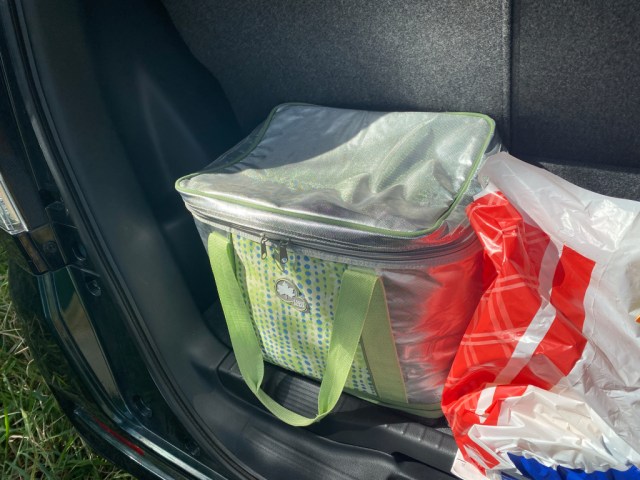 After getting back on the road and driving a bit more, her friend eventually parked the car in a spot where sugarcane and overgrown vegetation went on for as far as she could see. Somewhere out there beyond all of that green must be the ocean because she could smell the salt in the air. 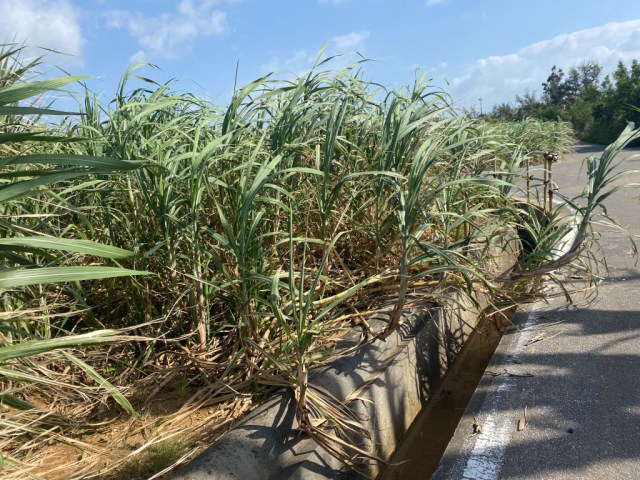 She was then surprised when her friend pulled a compact barbeque set out of the trunk. Apparently it was always stored in there–and that was fairly normal in these parts. They would have to traverse the vegetation for a bit to reach the spot where the beach party would take place. Ikuna had thought that the beach would have a proper parking lot and showers like all of the beaches she was used to, but her impression was quickly squashed when she spotted a “Beware of habu [pit vipers]” sign. 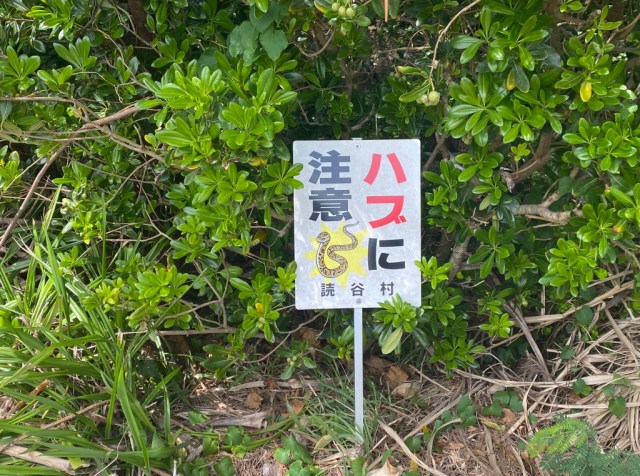 They trudged onward through the brush while paying careful attention to their feet as the water slowly came into view. 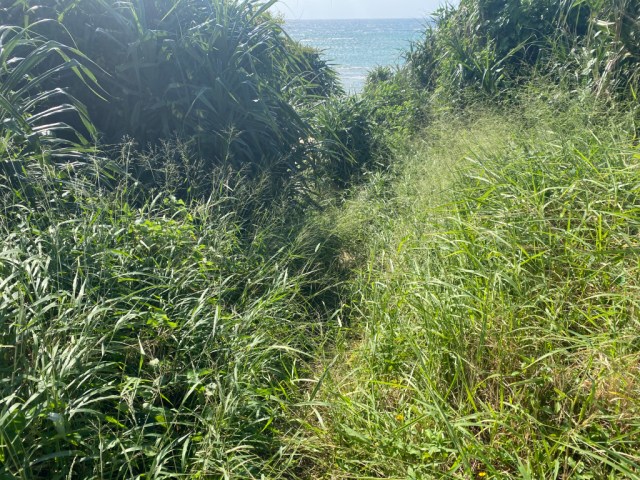 At last, they had made it! They seemed to be the first ones to arrive. The beach was a true hidden gem. 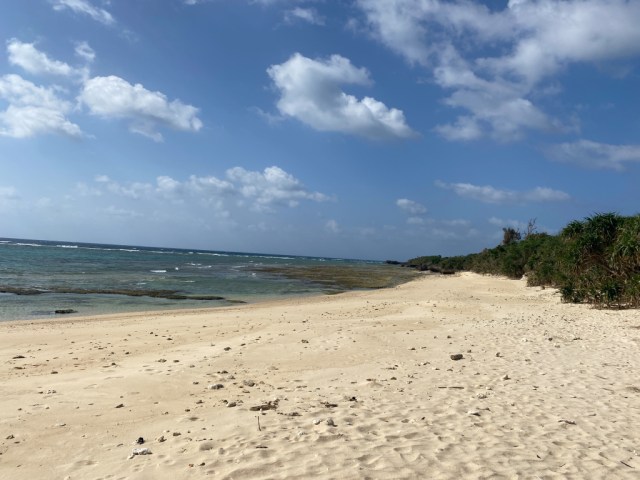 Ikuna realized that there was no way she would have ever found this kind of off-the-beaten-path spot on her own if she were traveling around Okinawa as a tourist. She felt incredible gratitude towards her friend who was sharing her private slice of beach with her. 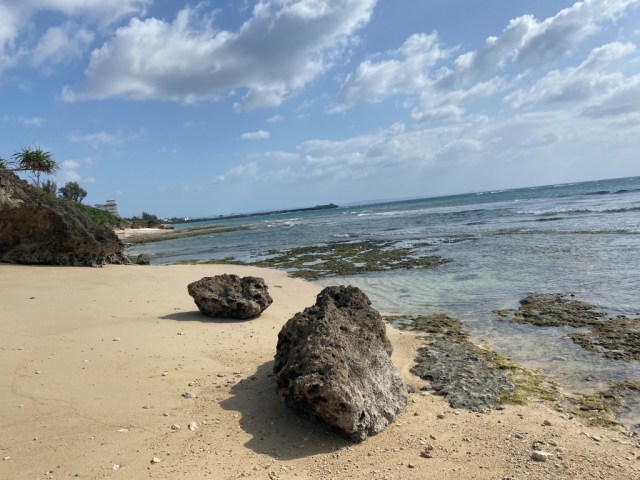 Blue skies, blue waters, and a beach all to themselves…with not a single footprint in sight. 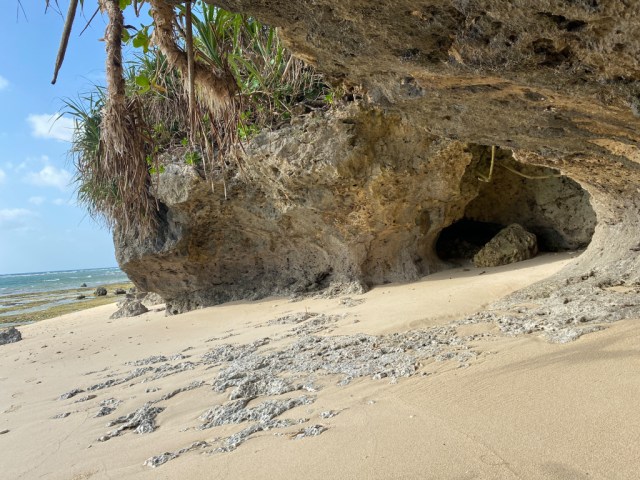 Ikuna took a moment to appreciate the exquisite shadows cast in the water by Okinawan rock formations.

After a while, she asked her friend when the others would be coming. Her friend replied with a laugh that this day’s “party” consisted of just the two of them. Huh? Could that really be considered a “party”?! Ikuna finally had her answer about what an Okinawan beach party was like. Apparently a party there could be like the massive, wild gatherings she had imagined, but more often than not it could also be the sort of outing where your ancient grandfather knocks back a drink and tells tales of yesteryear. Okinawans of all ages love a chill hangout on the beach. As long as there were at least two people involved as well as food and drink, it could be considered a party. 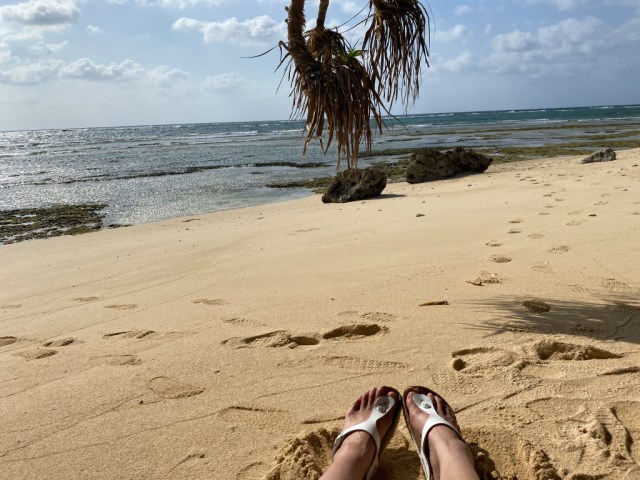 Somehow, this realization only made Ikuna happier. It fit nicely with the cheerful image of Okinawans. Soon it was time for some food and beverage: 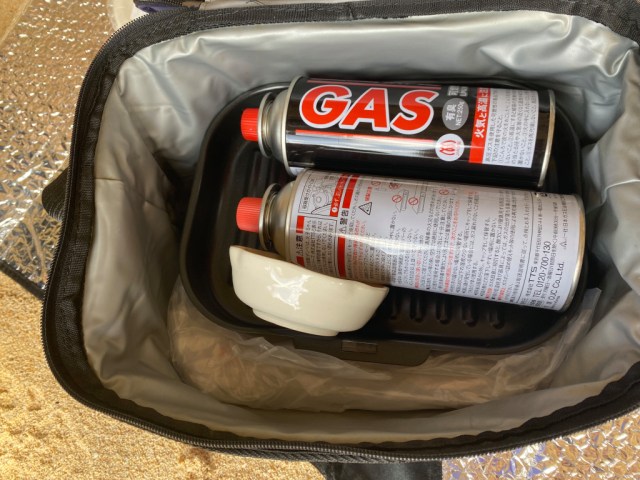 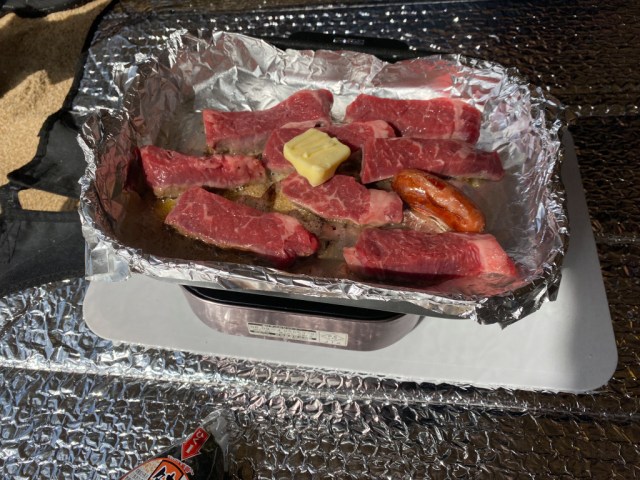 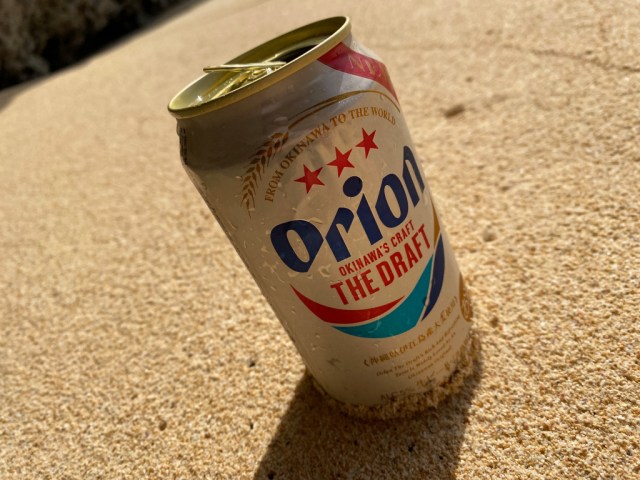 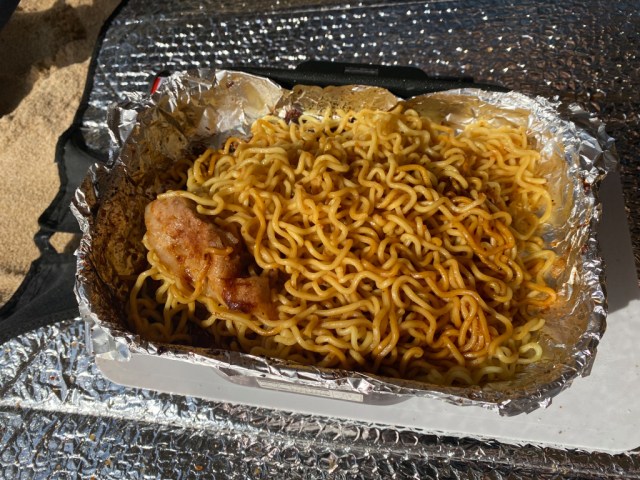 …it makes the clean-up super easy. 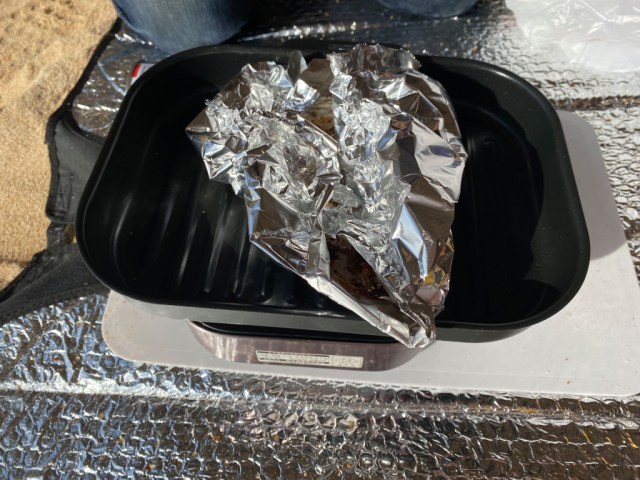 All in all, it was a fantastic, relaxing time and an excellent opportunity to party like the locals. Ikuna recommends that you should never pass up the chance to tag along if an Okinawan local invites you along for a beach party–just remember to watch out for the snakes. All images © SoraNews24 ● Want to hear about SoraNews24’s latest articles as soon as they’re published? Follow us on Facebook and Twitter!