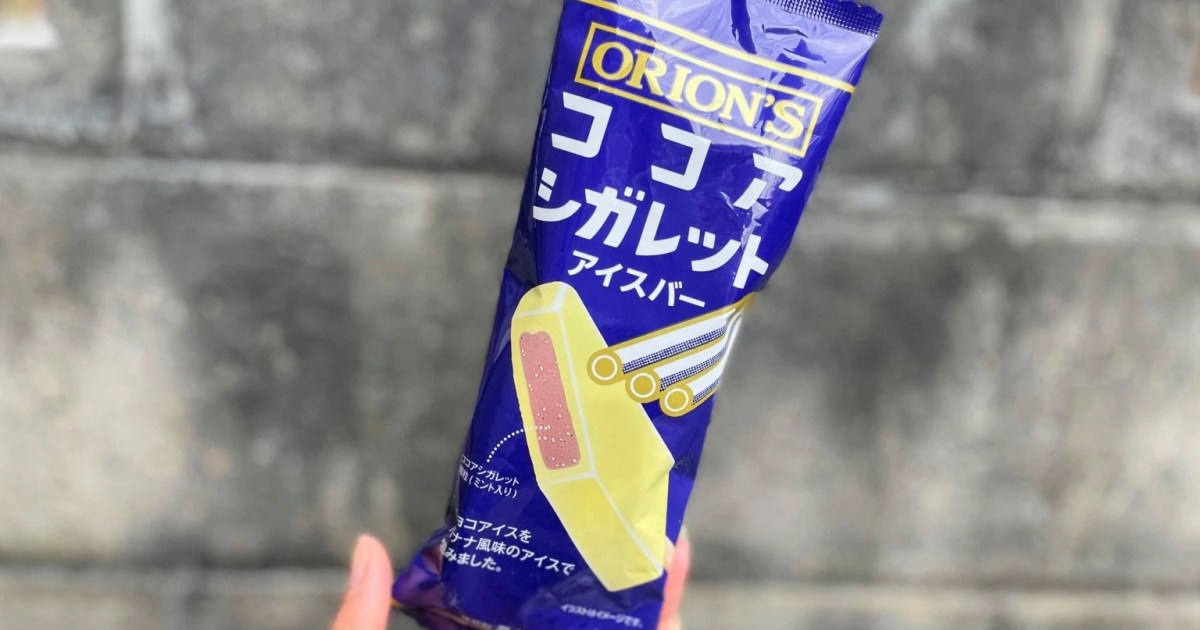 Boy, if I had a nickel for every time that happened. Singer-songwriter Aimyon is among the musical elite of Japan’s pop scene. Her hit “Marigold” earned her a spot on the prestigious year-end Kohaku song battle, and with such fame comes the ability to be a trendsetter.  For example, you know those cigarettes made out […] 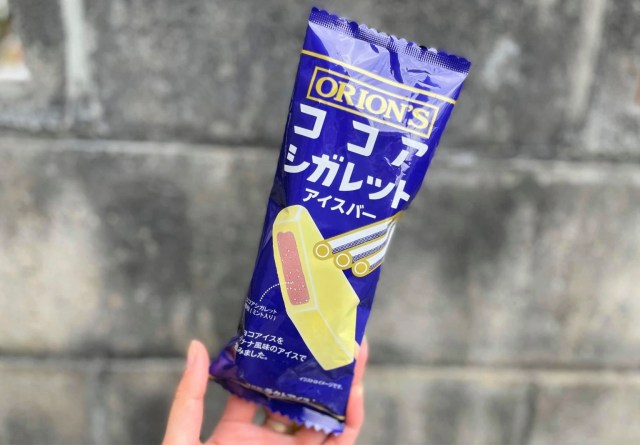 Boy, if I had a nickel for every time that happened.   Singer-songwriter Aimyon is among the musical elite of Japan’s pop scene. Her hit “Marigold” earned her a spot on the prestigious year-end Kohaku song battle, and with such fame comes the ability to be a trendsetter.  For example, you know those cigarettes made out of candy they came up with back when people drove cars as big as boats and men wore suits to McDonald’s? Even in Japan where widespread public smoking continued into the 21st century, these not-so-subtle gateway snacks have somewhat fallen out of fashion in recent years. So, if I were to post a picture of myself enjoying one of those things on the Internet, people would probably tell me to give myself a Chinese PCR test with them. However, when Aimyon does it, it becomes just the greatest thing in the world.

Now that’s power, and beyond that, candy cigarettes started trending so hard from this post that ice cream producer Celia Royale and candy-cigarette brand Orion joined forces to make Cocoa Cigarette Ice Bars and got them into store freezers as early as 1 March! 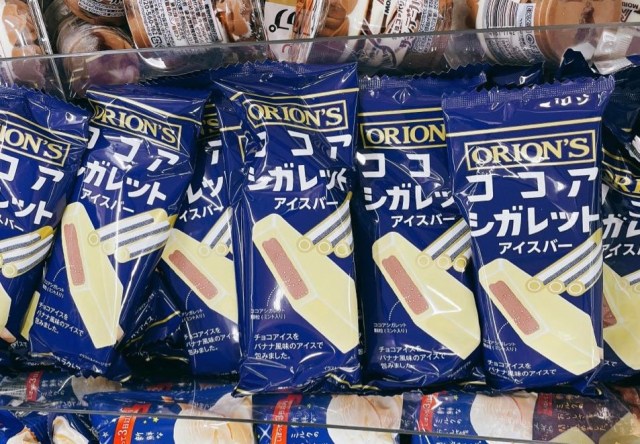 They’re only available in the Kansai area, but much like the candy they’re based on, they sell really cheap at 84 yen ($0.78) a pop. Due to their limited availability, we sent our Kansai-based reporter Masami out to try some. But being the thorough reporter she is, she started by tucking into a pack of original Orion Cocoa Cigarettes for the first time since she was a kid, to remind herself of how they tasted. They didn’t seem to change a bit and had that same chocolate candy flavor with a hint of mint to make kids feel more mature while eating them. 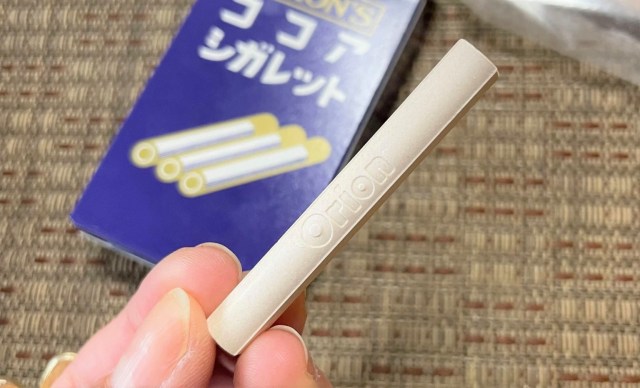 Of course, she’d be remiss not to take her own Aimyon homage photo in the process.

With her tastebuds properly calibrated, Masami opened an ice bar for tasting. Much to her surprise the color was more of a pale brownish-yellow than white. It was almost as if everyone was smoking in the ice cream factory all the time. 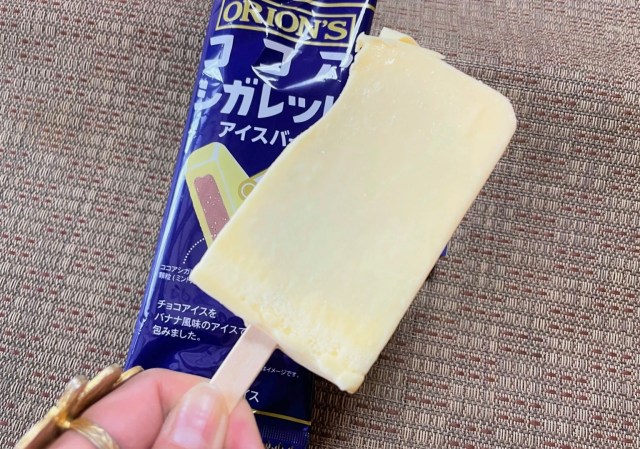 It was a little disconcerting, but she forged ahead and took a bite. Surprised once again, she could taste some banana, which would account for the yellowish color. Naturally, chocolate and banana are a winning combination, so this ice cream bar certainly didn’t disappoint in the flavor department. 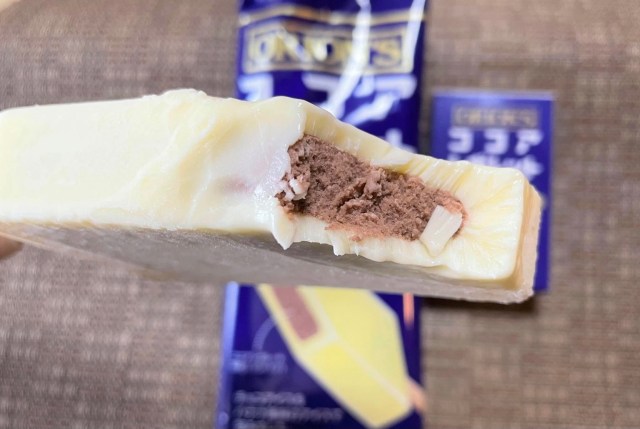 But something was still a little off. The Cocoa Cigarette Ice Bar tasted great, but not all that much like the actual candy cigarettes she had just eaten. Confused about what exactly made this a “cigarette ice bar,” she consulted the package.

▼ “Bits of Cocoa Cigarettes (with mint)” 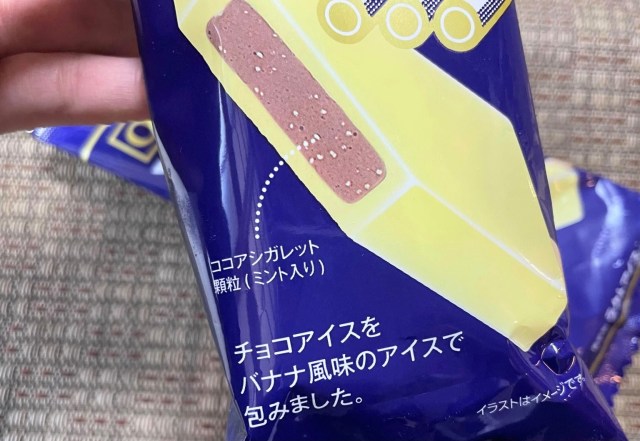 Masami took another look at her bar, and sure enough there were teeny tiny white bits of candy mixed in with the chocolate ice cream center. Knowing this, she could soon detect a faint hint of that nostalgic choco-mint taste lingering in the background of the choco-banana treat. 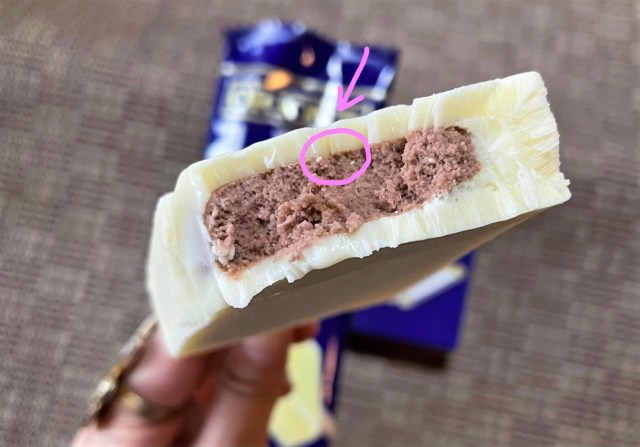 Before finishing, Masami decided to try and beat Aimyon to the punch with a viral image of her eating a candy cigarette ice cream bar. 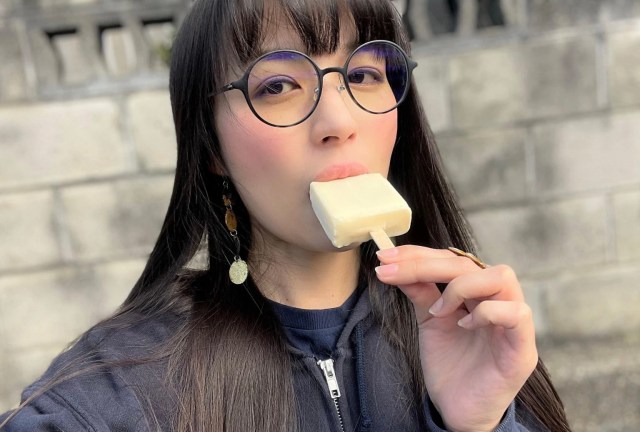 We’ll wait and see what happens with that, but in the meantime the Cocoa Cigarette Ice Bar was a really nice treat and showed that the somewhat outdated candy has the flexibility to evolve into something else in the future. Next time, hopefully someone can get Aimyon to pose for a picture while eating an Ichigo Milk, because I’d love an ice cream version of that too.