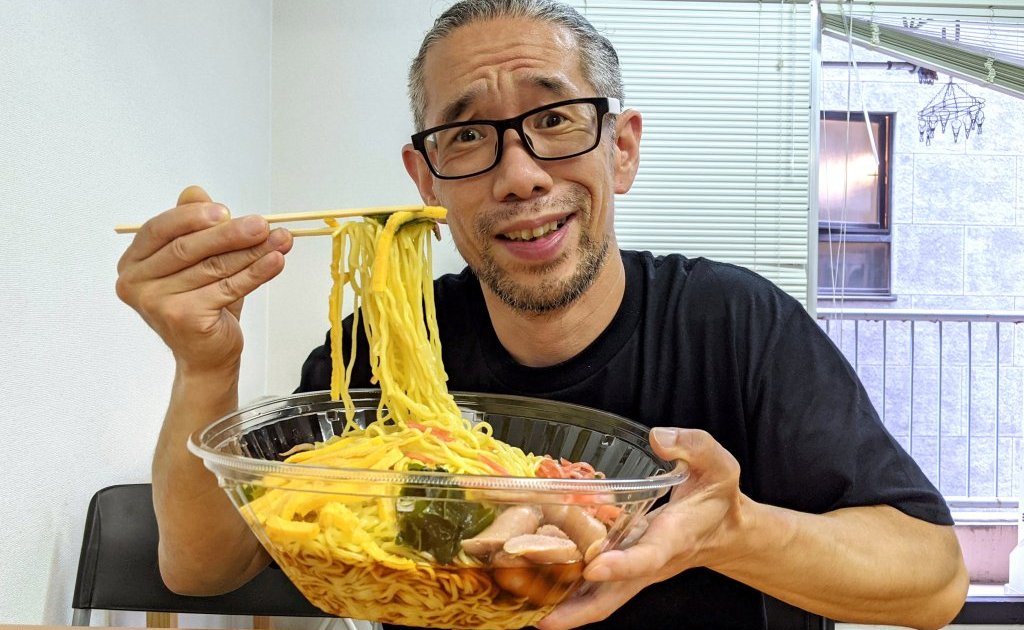 Mr. Sato takes on this mega bowl of hiyashi chuka and possibly snubs his boss in the process

When the summer heat decreases your appetite, there’s nothing like a giant bowl of chilled noodles to bring it back. In January, buffet-style chain Stamina Taro (home to this massive Napolitan spaghetti) began offering mega portion-sized dishes limited to takeout orders. In particular, the chain is now promoting its mega-sized version of standard summer fare […] 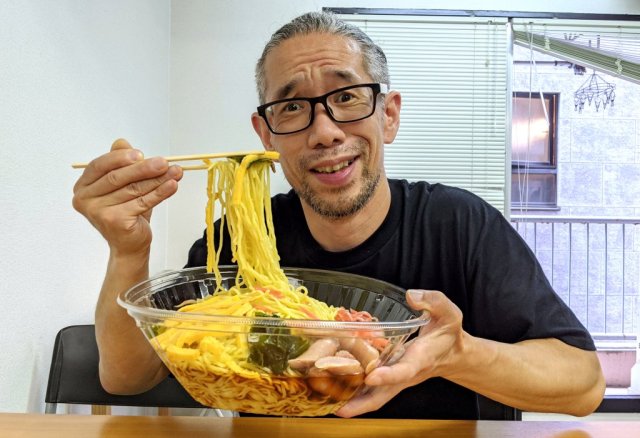 When the summer heat decreases your appetite, there’s nothing like a giant bowl of chilled noodles to bring it back.

In January, buffet-style chain Stamina Taro (home to this massive Napolitan spaghetti) began offering mega portion-sized dishes limited to takeout orders. In particular, the chain is now promoting its mega-sized version of standard summer fare hiyashi chuka, or Chinese-style chilled ramen noodles with various toppings. When they say “mega,” they’re not kidding around, either. The dish clocks in at 1.6 kilograms (3.5 pounds) for only 1,080 yen (US$9.80).

Of course, our team of writers is more or less contractually obligated to never turn down a massive food challenge–especially the illustrious Mr. Sato. He promptly picked up an order of hiyashi chuka from the Stamina Taro Next location in Takadanobaba, headed back to the office, and sat down to unpack his meal. Surprisingly, it wasn’t the size of the food that initially floored him. Rather, it was the fact that the restaurant had included only one pair of disposable chopsticks!

▼ Do most diners put away the mega-sized portions by themselves?! 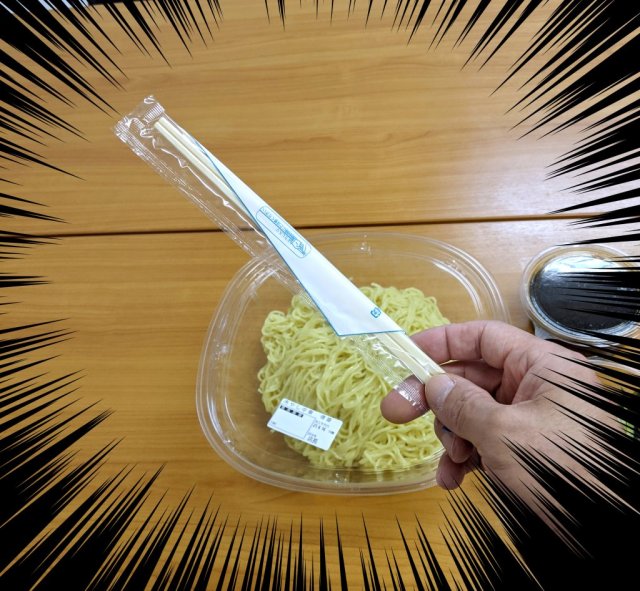 Were the staff sending a message that he was supposed to finish it all on his own? Or perhaps he just looked like a big eater to them. In any case, he decided to take it as a compliment that they thought he was up to the challenge. After unpacking everything, Mr. Sato took a moment to revel in the monstrous proportions of the ingredients. 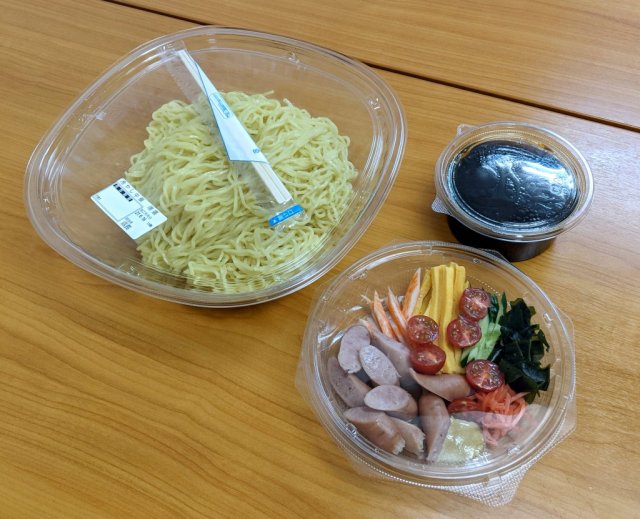 The bowl of noodle toppings looked like a main course salad in and of itself. Similarly, the sauce could be mistaken for an iced coffee if he wasn’t careful. 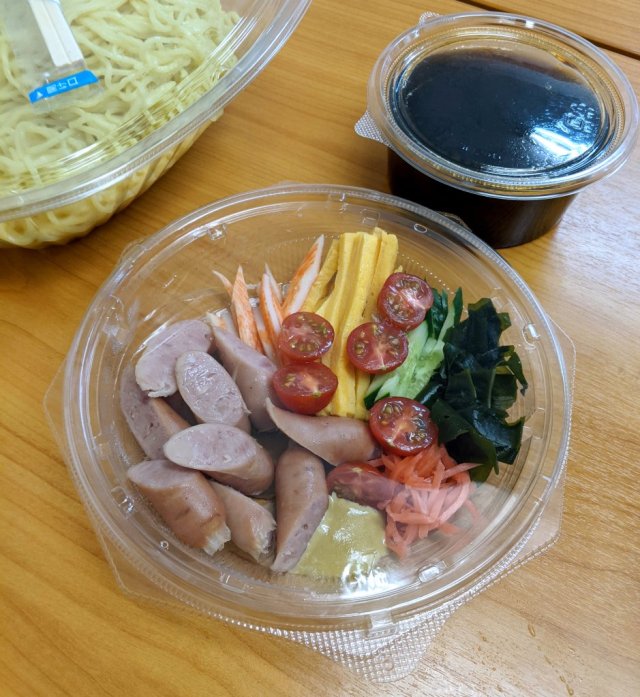 Of course, the extreme volume of noodles was the crowning achievement of his order. 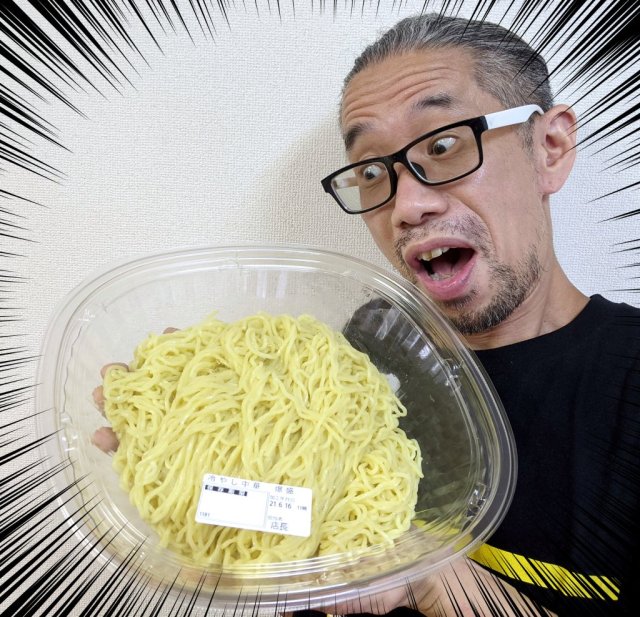 Now it was time to assemble the individual parts. Mr. Sato viewed the open bowl of noodles as a blank canvas onto which he could paint his very own hiyashi chuka masterpiece. 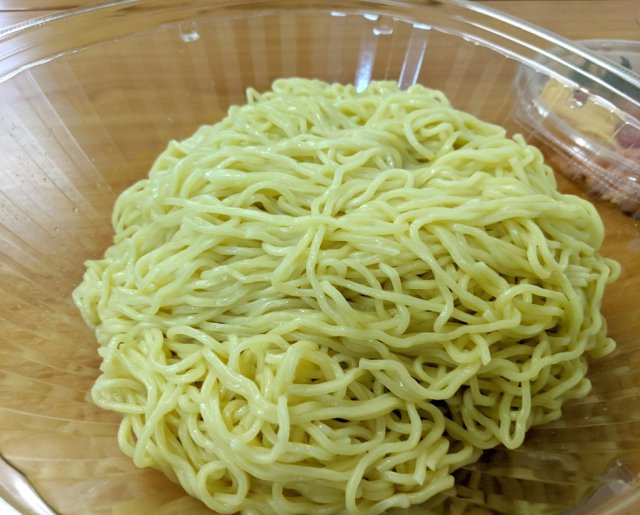 He quickly discovered the importance of balancing the various toppings for both gastronomic and aesthetic purposes. 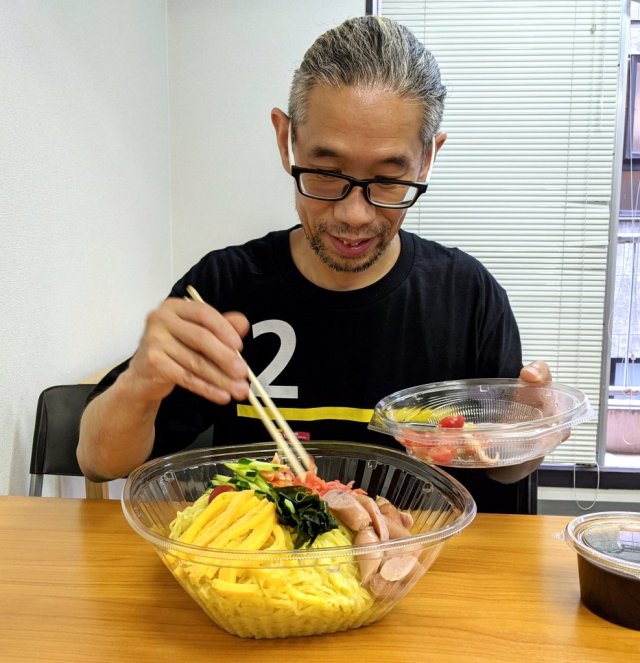 Next, he prepared to drizzle the sauce over his work of art as evenly as possible. Careful, Mr. Sato… 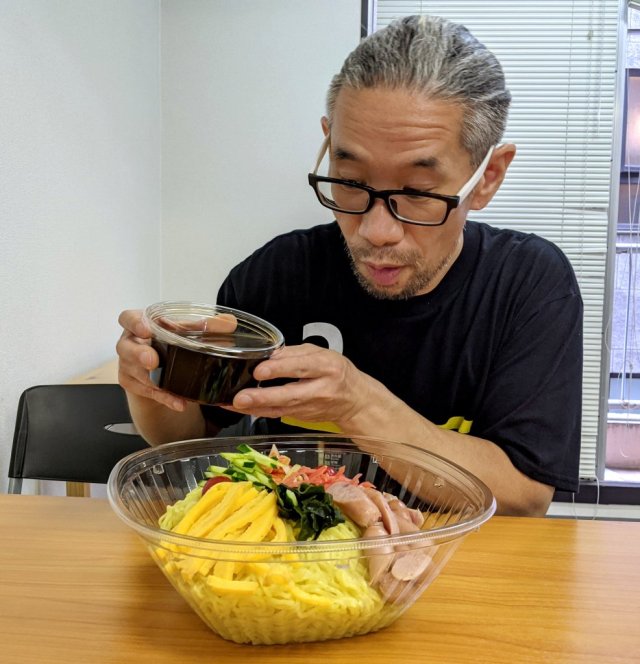 He got a little carried away when he realized how similar it looked to a waterfall. 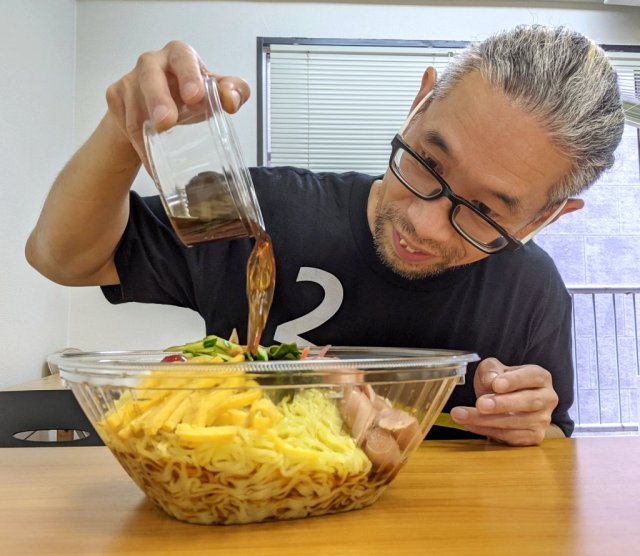 At last, his very own hiyashi chuka masterpiece was complete! It was truly a work of art. He would have preferred slices of ham instead of the sausages, but oh well. 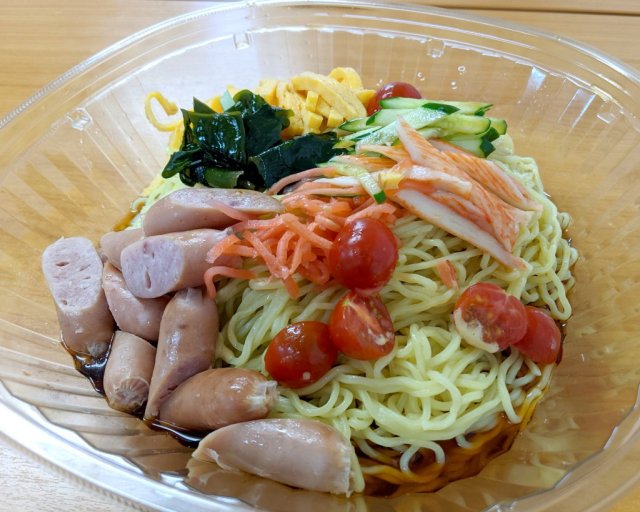 Time for a big bite. 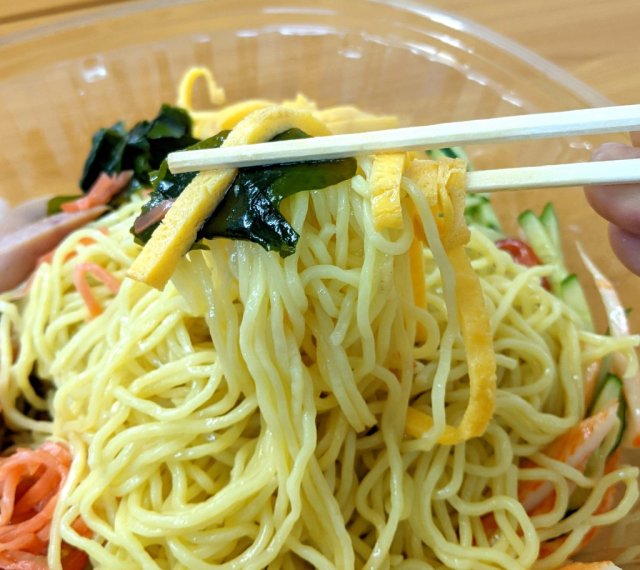 Despite the enormous size, everything was prepared to perfection. The noodles were springy and he slurped them down with gusto. He might actually down the whole bowl with no trouble at all. 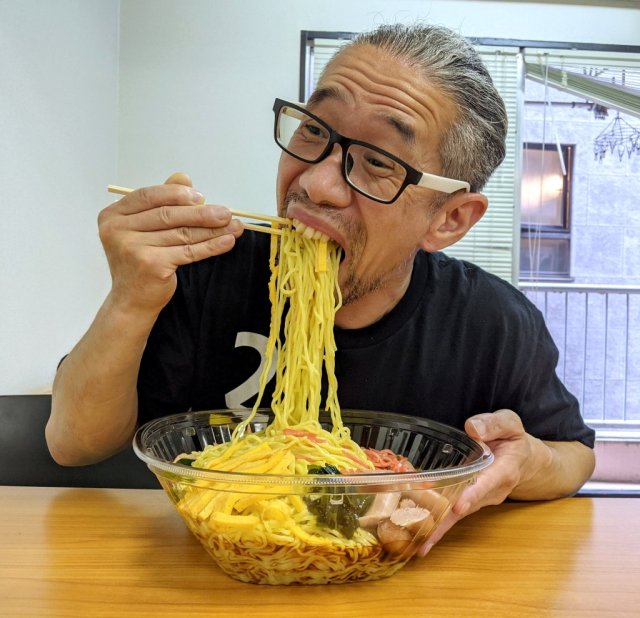 He thought he noticed the noodles slowly but steadily decreasing. He just had to keep up the same pace. 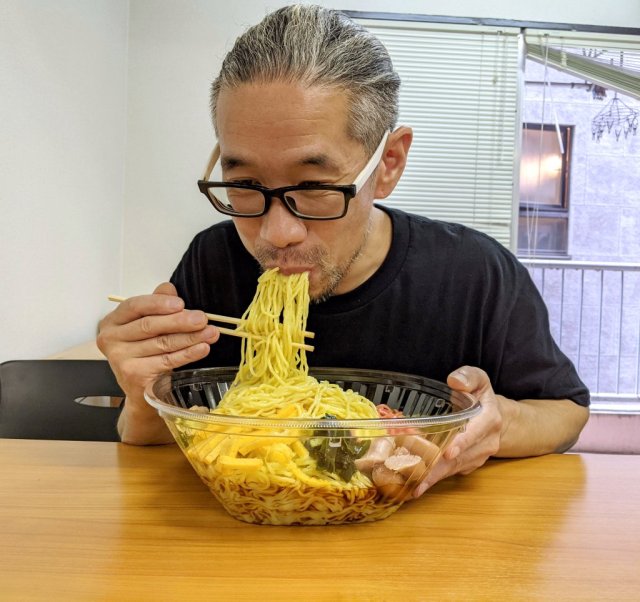 All this time, SoraNews24 founder and giant chocolate egg enthusiast Yoshio had been documenting Mr. Sato’s hiyashi chuka-eating experience. Mr. Sato initially thought about offering a few bites to his boss, but only one pair of chopsticks had been provided. It probably wasn’t a good idea to share his partially eaten food anyway because of the pandemic. “Oh well–sorry, Yoshio,” he thought. 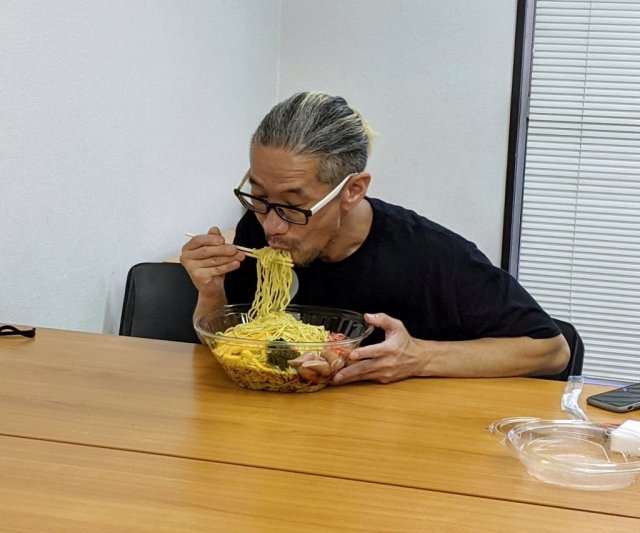 He also mused that this was his first hiyashi chuka he had eaten of the season–no wonder it tasted extra delicious. It’s funny how absence can make the taste buds grow fonder. 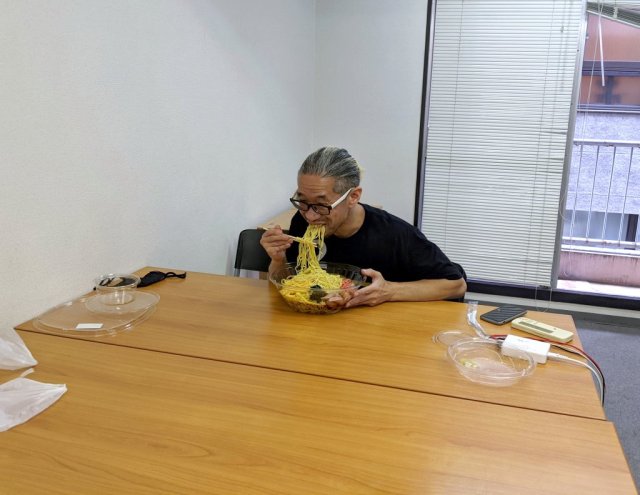 Yoshio, perhaps miffed at being denied even a bite of noodles, then made a comment that Mr. Sato seemed to be doing more talking than eating. “Huh? That’s not the case at all! Look at how much these noodles have gone down,” Mr. Sato assured him. 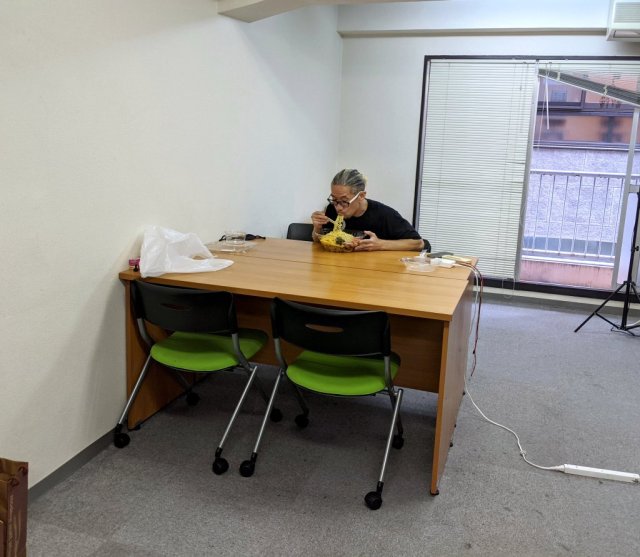 “In fact, I think I’m going to take a short rest now, just so that I don’t regret it later,” he added. 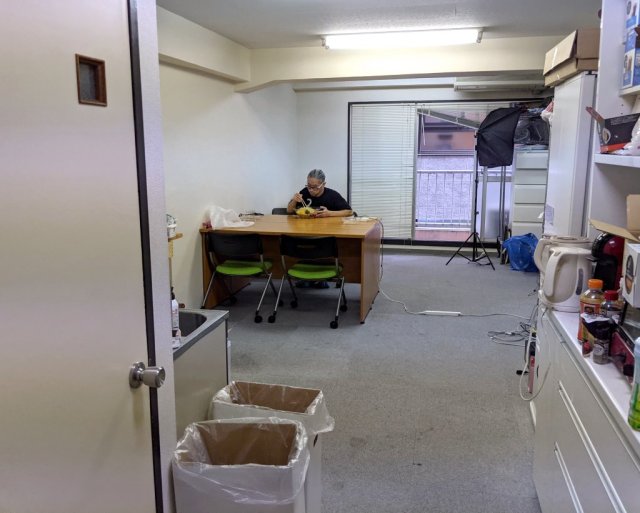 “Actually, it would probably be hard to keep eating at the same pace again once I stop. Maybe I’ll put the lid back on and bring it home. Tonight’s dinner can also be hiyashi chuka.” 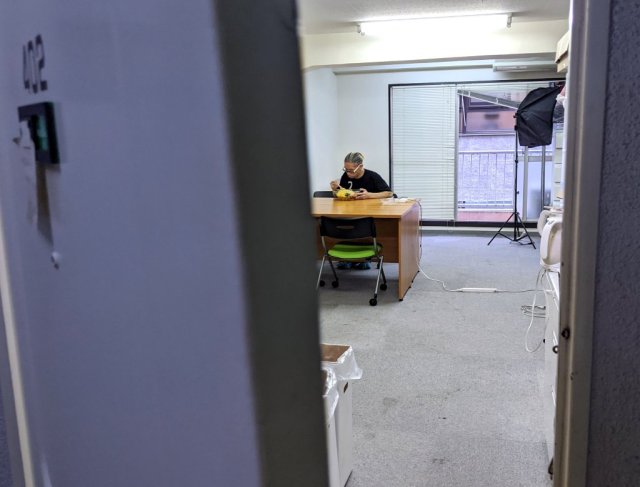 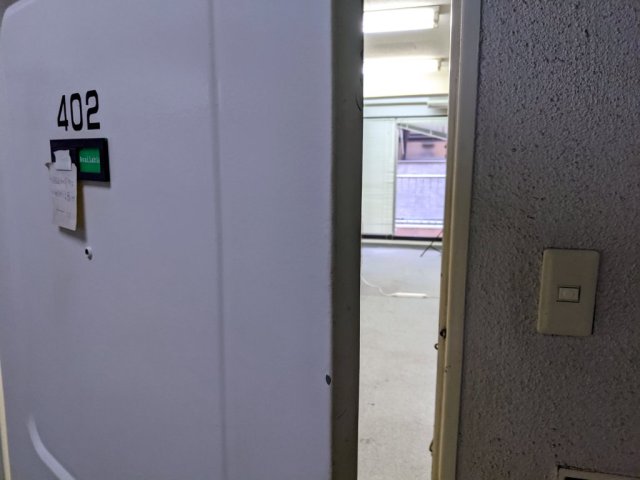 At that point, Yoshio had already wandered off to find one of his workers who would be willing to share. Maybe Seiji still had some of that amazing vending machine curry lying around…? By the way, Mr. Sato recommends that you call ahead to place your order for any of the mega-sized dishes because it took about 30 minutes for his food to be prepared. If hunger is the best spice, however, then maybe you’ll be fine waiting just a little bit longer. Restaurant information Stamina Taro Next BigBox Takadanobaba branch / すたみな太郎 Next BigBox 高田馬場店 Address: Tokyo-to, Shinjuku-ku, Takadanobaba 1-35-3 BigBox 9th floor 東京都新宿区高田馬場 1-35-3 BigBox 9階 Open: 11 a.m.-4 p.m. (lunch), 4 p.m.-8 p.m. Website All images © SoraNews24 ● Want to hear about SoraNews24’s latest articles as soon as they’re published? Follow us on Facebook and Twitter!