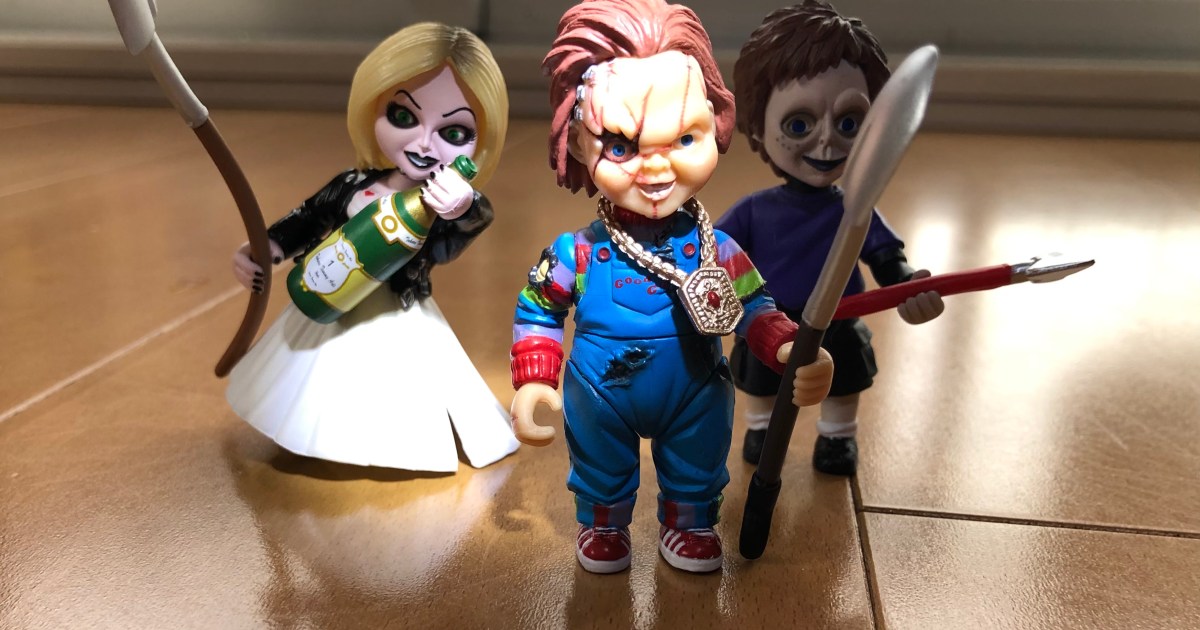 Chucky and Friends save Easter

When these Good Guys are around, having a fun Easter in Japan is child’s play! A few years ago, there was a rather big push to try and make Easter the next big holiday in Japan. Universal Studios Japan had annual events and you could usually count on Krispy Kreme to come out with a […] 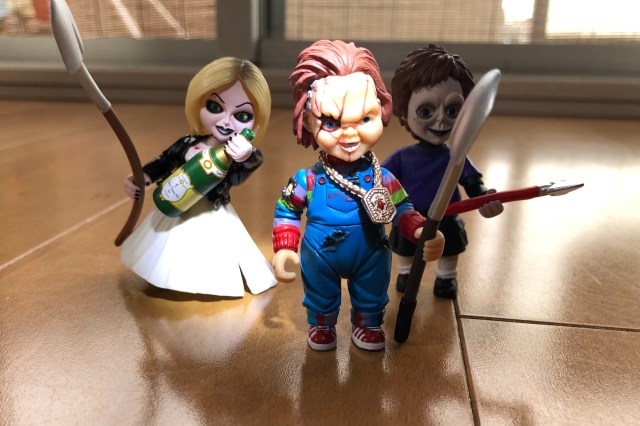 When these Good Guys are around, having a fun Easter in Japan is child’s play!   A few years ago, there was a rather big push to try and make Easter the next big holiday in Japan. Universal Studios Japan had annual events and you could usually count on Krispy Kreme to come out with a line of rabbit and egg donuts. 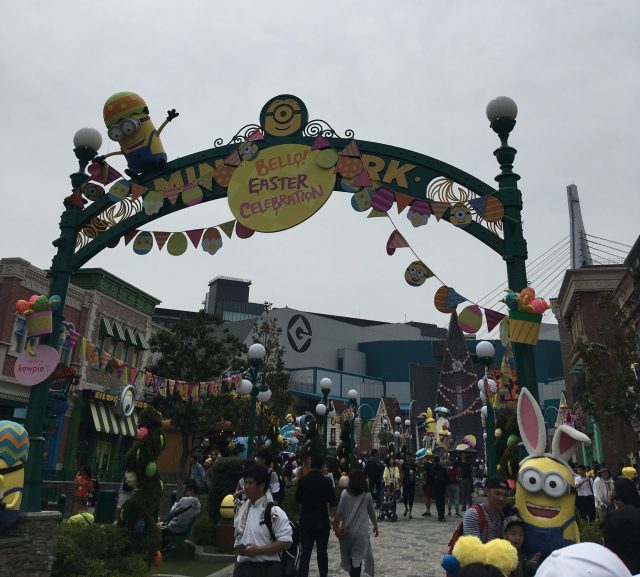 However, when COVID-19 reared its ugly head, the resulting economic downturn and desire to not bring crowds of people together brought the Easter promotion to a screeching halt. That’s why this year I hadn’t even noticed the holiday’s arrival until it was right on top of me. After uttering “Oh, it’s Easter, isn’t it,” my kids launched right into their demands for a good old Easter egg hunt. I certainly didn’t want to let them down, but the only problem was we didn’t have anything ready to hunt, so my eldest daughter and I went down to Daiso in the hopes they’d have some Easter goods. After checking their seasonal goods section there was not a rabbit nor egg to be seen, so we left dejectedly. But just was we were heading out the exit, something caught the corner of my eye. 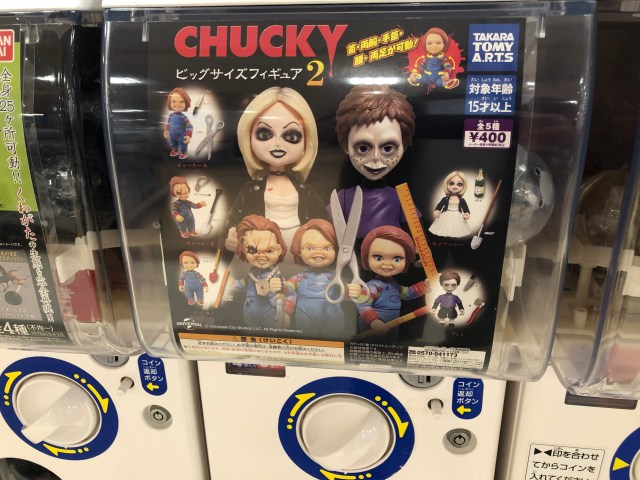 My daughter noticed something had caught my interest and asked what it was. I pointed to the machine and she casually said, “oh, Chucky?” I was a little taken aback that my 7-year-old was familiar with one of cinema’s most prolific spree killers from the ’80s, but I guess kids really do grow up fast. Then I got to thinking: “What would Chucky do in this situation?” In the pantheon of movie villains, Chucky really got a raw deal. Unlike juggernaut Jason or Freddy with his seemingly limitless powers in the dream realm, Chucky was just a doll and had to rely on pure resourcefulness and above-average scuttling to get his killing done. It was exactly this spirit that I needed to bring to this Easter! So, we took three turns of the capsule machine and hurried home to celebrate Easter Sunday. 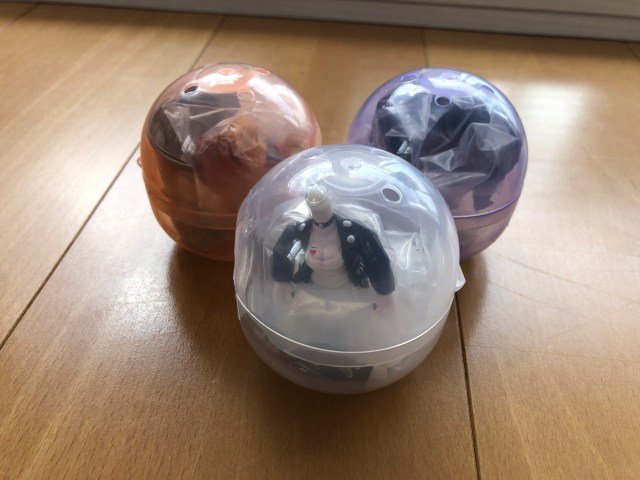 In each capsule that cost 400 yen ($3.66) we got a Chucky version B, his wife Tiffany, and their son Glen. They all came with accessories such as shovels, knives, bottles of champagne, and even a Heart of Damballa! 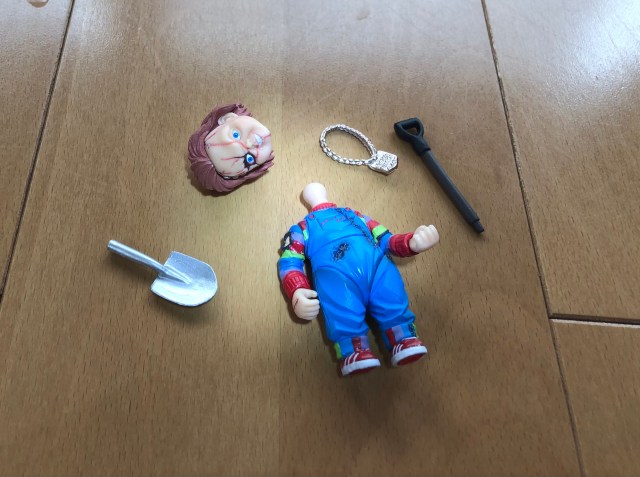 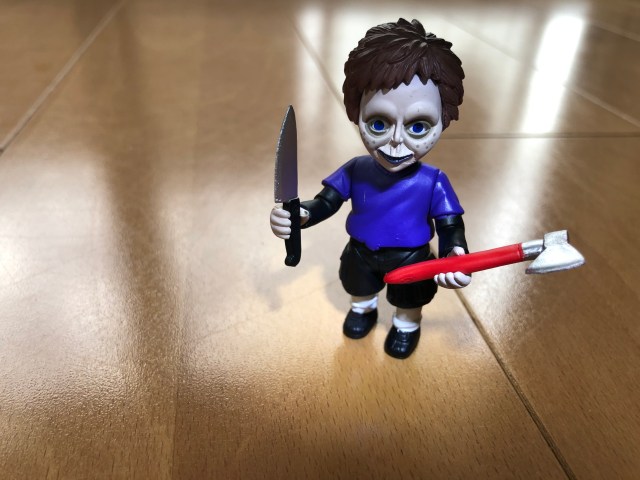 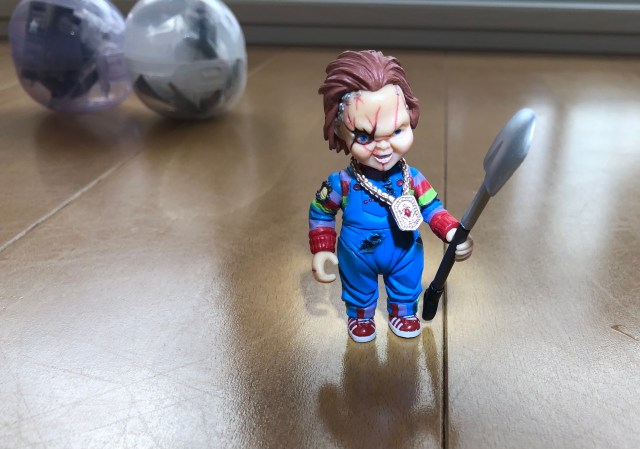 There are two other versions of Chucky to complete the set of five. Also, our Tiffany was a little strange-looking. 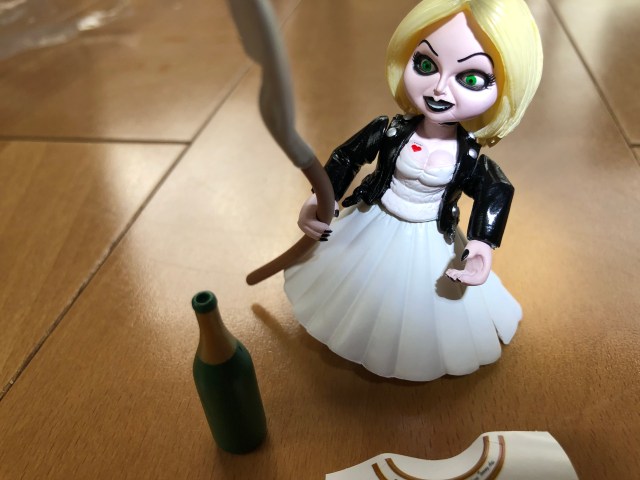 At first I thought it was intentional, as if her arm was broken among all the mayhem, but it turns out I got a defective one with two right arms but a right and left hand. 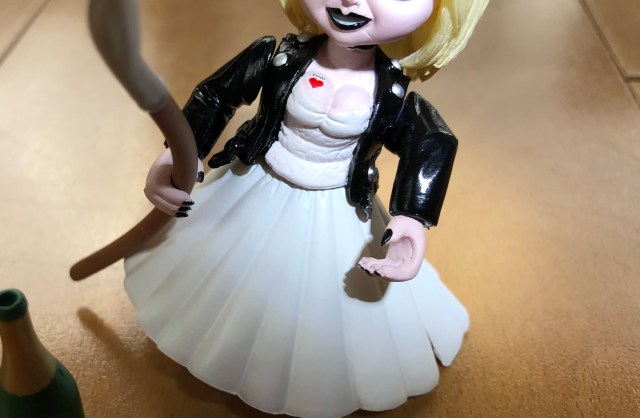 I wondered if that might be worth something on the open market, but that would have to wait. It was Easter and we had a homicidal doll hunt to do!

▼ “Oh, whatever could that ominous glow in your box of dolls be?” 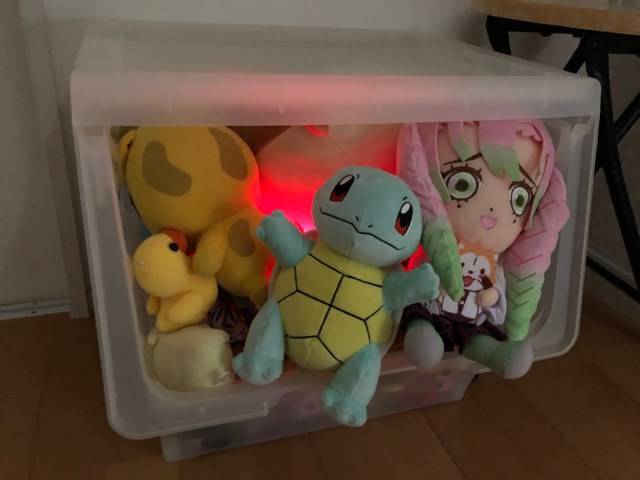 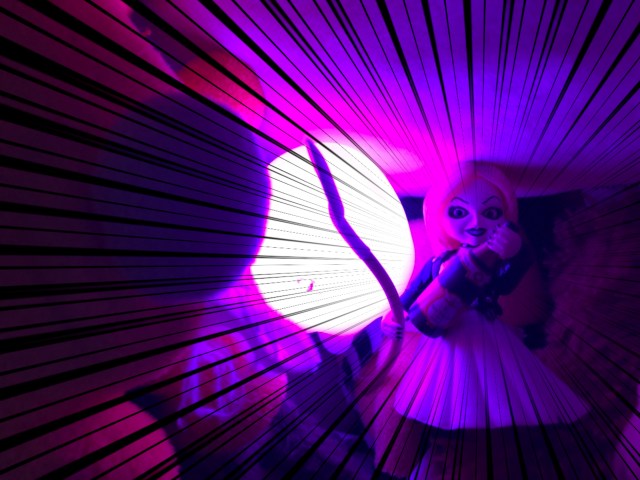 ▼ “Say, I think I hear the soul of a child sobbing over by the Lego…” 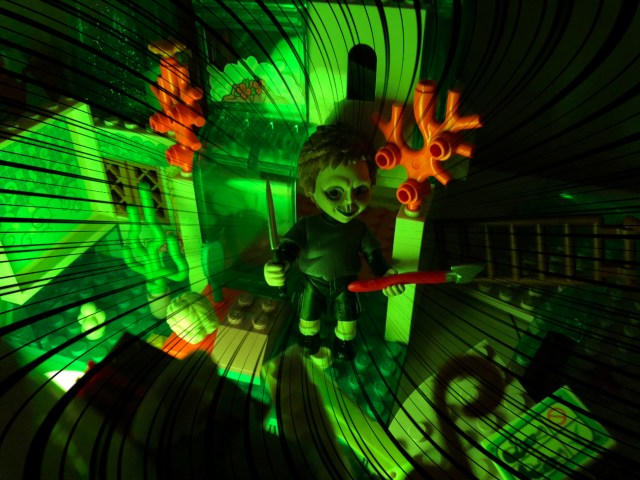 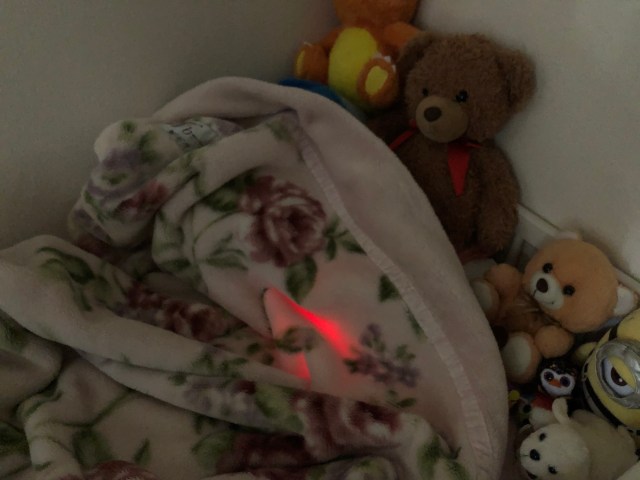 Yes, this year’s holiday festivities were a rousing success. The kids were so excited that even days after they still wake up in the middle of the night screaming. I should have known that a guy who was killed for his beliefs only to be resurrected shortly afterwards would be the perfect solution to our Easter blues. 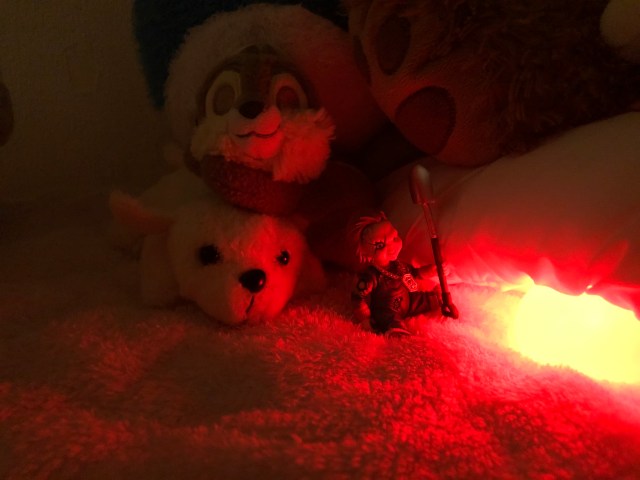 By the way, you might be wondering how I made those light effects. My kids each have these cute little plastic eggs that colorfully light up. They’re perfect for hiding behind monsters during your next Easter hunt. 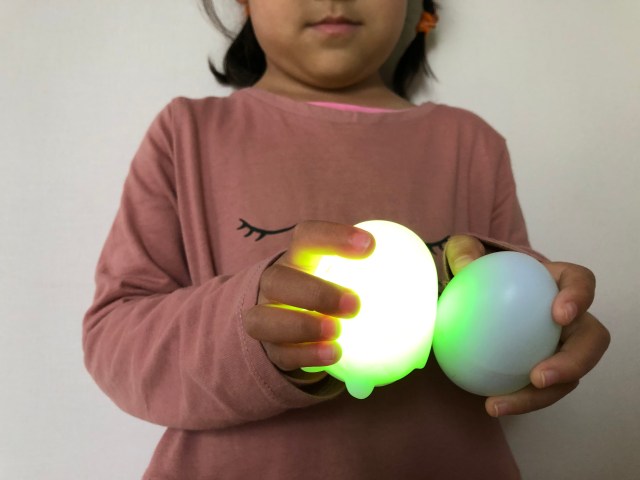 Anyway, next time you find yourself in a predicament, take a page from the book of Chucky and never give up. Just keep hacking and hacking away at your problems until they’re a bloody pile of entrails. And that everyone, is the true meaning of Japanese Easter.