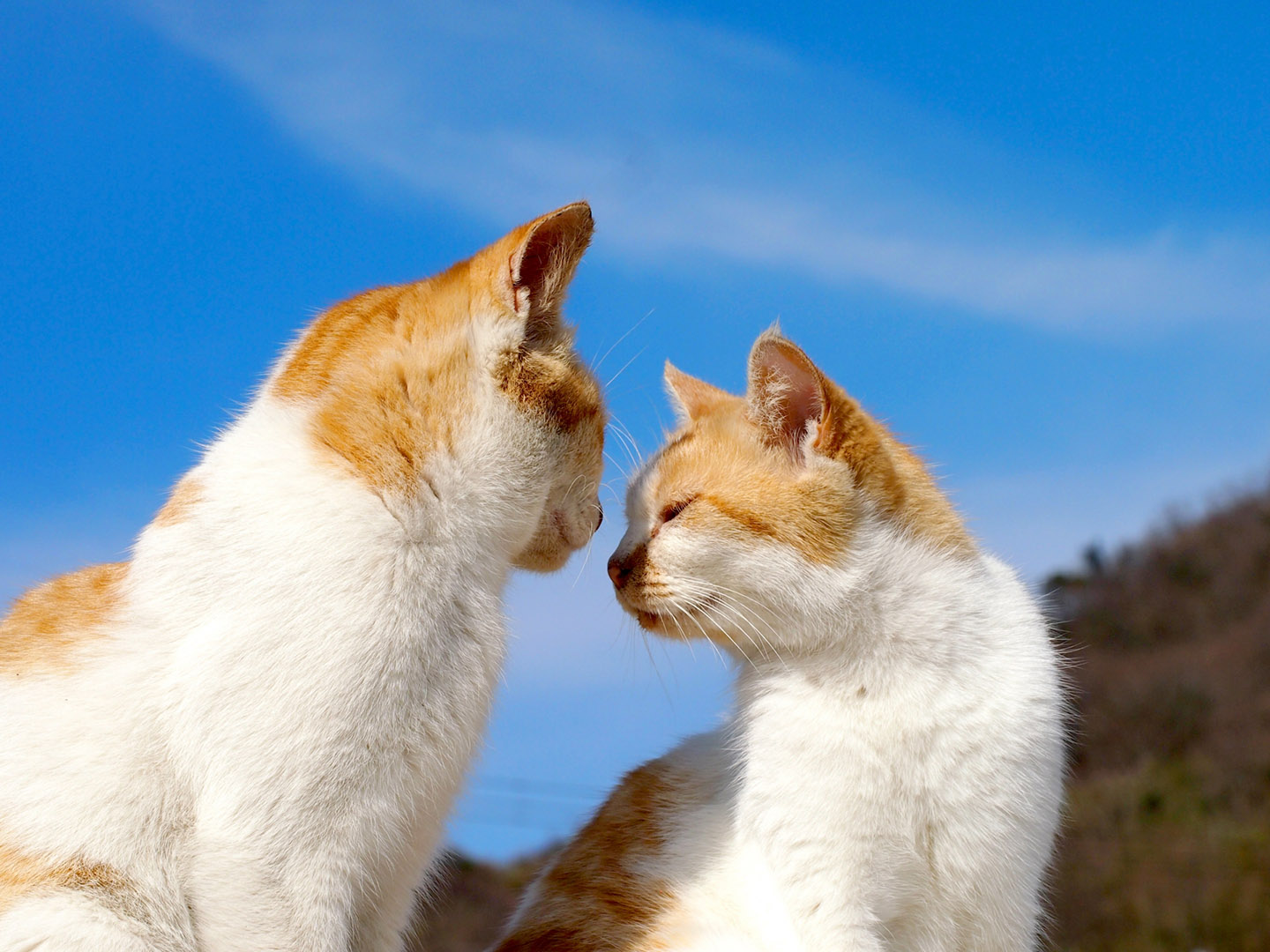 The small island of Tashirojima is located near the Oshika Peninsula in Ishinomaki City, Miyagi Prefecture and in recent years, it has become known as the island of cats and manga. Today, the island has a thriving tourism industry that caters to fishermen, anglers, and tourists, and is literally a "cat island," with more cats than people living there. It even has a cat shrine, “Neko Jinja” where the "cat god" is enshrined. 【設施名稱】田代島 【地址】宮城県石巻市

The closest "cat island" for tourists and city residents coming to Tokyo is located in Kanagawa Prefecture, south of the capital city. Enoshima is a walking distance from Katase Enoshima Station, and can be reached by crossing the bridge at the end of the passage in front of the station. It is very famous for the shrine in the cave and the legend of the Tennyo and the five dragons associated with Enoshima. The nearby beach is popular during summer for surfers, sunbathers, and festival-goers. 【設施名稱】江の島 【地址】神奈川県藤沢市江の島 【電話號碼】0466224141

Not all cat islands are located by the sea. Okishima floats in the middle of Lake Biwa, which holds the largest volume of fresh water in Japan. Only 350 people live in the small fishing town on the island, and the main means of transportation on the island is by bicycle. The cats living here have no fear of being run over by cars. 【設施名稱】沖島 【地址】滋賀県近江八幡市沖島町

Aoshima in Ozu City, Ehime prefecture is a "cat paradise" and this is a very small island with a circumference of only 4.2 km. And surprisingly to know, for every 16 residents, there are more than 100 cats. To get to the island, visitors can take a regular boat twice a day from Nagahama Port, about a minute's walk from JR Iyo Nagahama Station, which basically gives priority to islanders. The island is small and not a tourist destination, so there are no guest houses, stores, or vending machines. 【設施名稱】青島 【地址】愛媛県大洲市

Sanagi Island, a remote island in the Seto Inland Sea which belongs to Kagawa Prefecture, is only 4 km in circumference. And has a population of less than a hundred. This island got popular due to photos of cats flying over a break in the embankment which went viral on social media. Since then, many visitors take a trip here to grab a shot of the cats flying. 【設施名稱】佐柳島本浦港 【地址】香川県

Muzukijima Island is one of the islands of the Kutsuna Islands in the Seto Inland Sea. The Kutsuna Islands are made up of more than 30 islands, including uninhabited islands, with the main island being Nakajima (the main island). Unlike other islands where the fishing industry is thriving and attracts cats, this Muzukijima Island is famous for its citrus cultivation including mandarin oranges and iyokans. Coincidence or not, the island has many “orangish” colored cats. 【設施名稱】睦月島 【地址】愛媛県松山市

The population of Ogijima Island is only about 180 people with more than 200 cats. This island is also one of the islands that partakes in the Setouchi Triennale – an art festival that happens every three years across the wider region. As a result various pieces of modern art can be found about the island. 【設施名稱】男木島 【地址】香川県高松市

Manabeshima Island is a small island in the Seto Inland Sea in Okayama Prefecture about 8 kilometers in circumference. The island has a reputation for having more stray cats than islanders. In addition to the cats, the island has been used as a set location for many movies and the guest houses there offer dishes made from fresh seafood from the surrounding seas are popular among many visitors. 【設施名稱】真鍋島 【地址】岡山県笠岡市真鍋島 【電話號碼】0865632111

Shukushima is a heart-shaped island with a circumference of 12 km in the Seto Inland Sea, belonging to Yamaguchi Prefecture.The topography of the island is such that the mountains close in on the sea, and the houses are concentrated on the narrow flat land to form villages. The main industries are fishing, agriculture, and tourism and there are inns, guest houses, and restaurants on the island. 【設施名稱】祝島 【地址】山口県熊毛郡上関町

Ainoshima Island located in Kokurakita-ku, Kitakyushu City, is a small island northwest of the Kanmon Strait. The island is rich in nature and used to be a place where agriculture was practiced in the old days, but nowadays, fishing is the main industry. The number of residents on this island is about 250 and famous for its cats, which are as numerous as the residents. On weekdays and weekends, many people visit the island to see the cute cats as the island is a quick and easy 35minute ferry ride from Kokura port. 【設施名稱】藍島 【地址】福岡県北九州市小倉北区藍島

Aijima, located in Kitakyushu, is a place where time flows very slowly and tranquilly and is one of the world's top six cat spots plus a popular tourist destination for people from all over Japan and the world. The island is very small, with a circumference of about 13 km, and is made up of only a few islanders, about 100 households and a population of less than 300. The island is also known for having as many cats as its population. In recent years, the island has become popular among cat lovers, and the number of tourists has increased rapidly along with its popularity. 【設施名稱】相島 【地址】福岡県糟屋郡新宮町

Genkai Island is one of the islands in Nishi-ku, Fukuoka Prefecture, and is also very famous as a cat island. The island is rich in nature, has delicious seafoods, and is easily accessible from Fukuoka City. Surrounded by the sea, Genkai Island is also known as one of the best fishing spots in Fukuoka City, and you can see cats waiting for fishermen to give them away. 【設施名稱】玄界島 【地址】福岡県福岡市西区

Kakarashima Island is located in the Genkai Sea, about 4 km north of the Higashimatsuura Peninsula in Saga Prefecture. The island is surrounded by steep cliffs and on a clear day, visitors can see the Korean Peninsula from a park on the island's hill. The island is also a great place for fishing, and there are many cats living on the island that attract many tourists. 【設施名稱】加唐島 【地址】佐賀県唐津市

Yushima, located in Kamiamakusa City, Kumamoto Prefecture, is a small island with a circumference of about 4 km, located in the center of the Ariake Sea. The residents live on the south side of the island, and the roads are narrow and steep, so the main means of transportation is on foot. The island has a thriving fishing industry, and the island's cats can always be seen coming to the harbor for a fresh seafood. There is a statue of a cat at the harbor which implies the visitors that this is literally a "cat island". 【設施名稱】湯島 【地址】熊本県上天草市

Surrounded by the cobalt blue sea, Taketomi Island has a relaxed atmosphere. Compared to other cats islands, there are more residents than cats. The islanders take very good care of these cats and do not call them "stray cats," but rather "wild cats. In such a warm environment, the cats are often seen sunbathing everywhere. 【設施名稱】竹富島 【地址】沖縄県八重山郡竹富町竹富