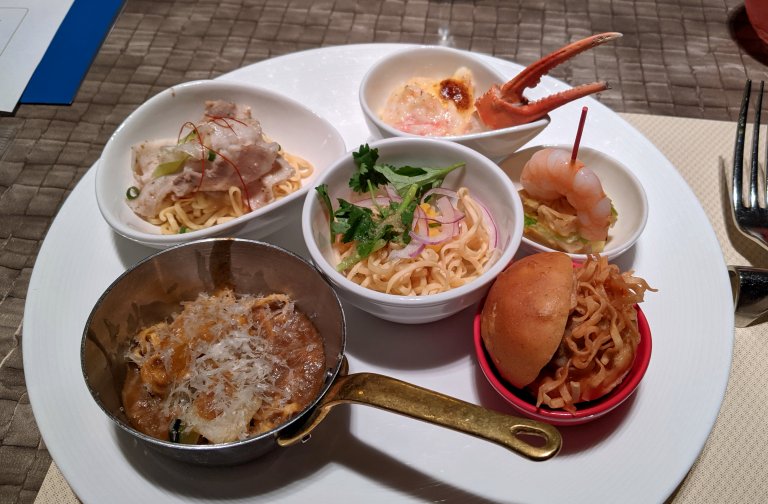 If you’ve ever wondered what fancy dishes with instant noodles would look like, look no further than the Keio Plaza Hotel! 2021 is a big year for anniversaries. For one, the classic ’90s toy, the Tamagotchi, turns 25 this year! For another, both the Keio Plaza Hotel in Tokyo’s Shinjuku and Nissin Cup Noodle are […] 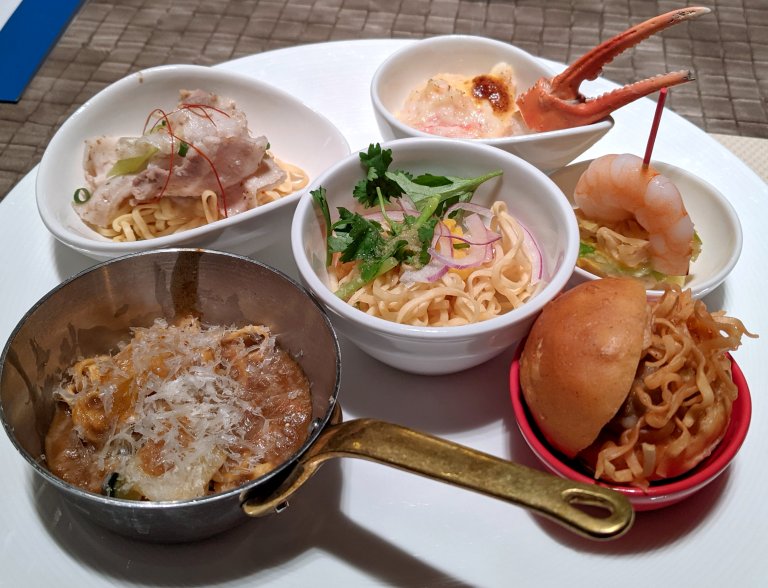 If you’ve ever wondered what fancy dishes with instant noodles would look like, look no further than the Keio Plaza Hotel!   2021 is a big year for anniversaries. For one, the classic ’90s toy, the Tamagotchi, turns 25 this year! For another, both the Keio Plaza Hotel in Tokyo’s Shinjuku and Nissin Cup Noodle are celebrating 50 years of business this year. Unsurprisingly, the coincidence has resulted in the crossover celebration of our dreams: fancy Cup Noodle-inspired hotel restaurant menus (frankly, we’re surprised McDonald’s didn’t jump in there since it’s their 50th anniversary in Japan, too, but they’re doing plenty of cool stuff to celebrate on their own, so we aren’t too mad about it). This month, the luxury hotel’s various restaurants and bars started offering their own special Cup Noodle fares, which are all based on popular Cup Noodle flavors. Of course, being a major foodie, our Japanese-language reporter Mr. Sato went as soon as he had the chance. Out of all the options, he decided to first try out the hotel’s buffet, known as the Glass Court, which is currently offering eight kinds of Cup Noodle dishes. 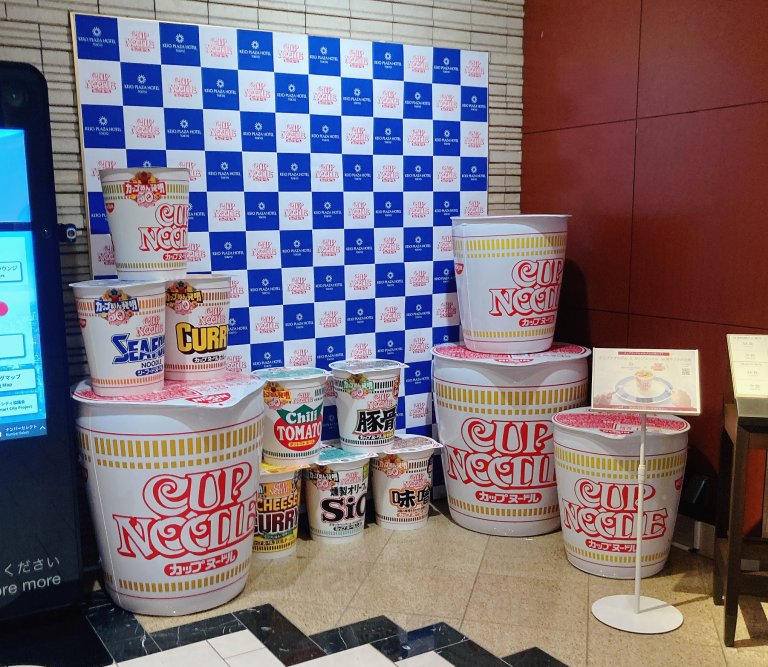 Set up in front of the buffet was a huge display of giant Cup Noodle bowls; the perfect opportunity for a photoshoot and a scene that got Mr. Sato suitably psyched to eat. He was ready to try out a Cup Noodle dish right away, but upon being seated he was served a plate of tiny hors d’oeuvres​, which he of course had to eat first.

▼ Though Mr. Sato relishes a fancy meal as much as any other person, he couldn’t help but wonder who in the world would be satisfied with such minuscule morsels. 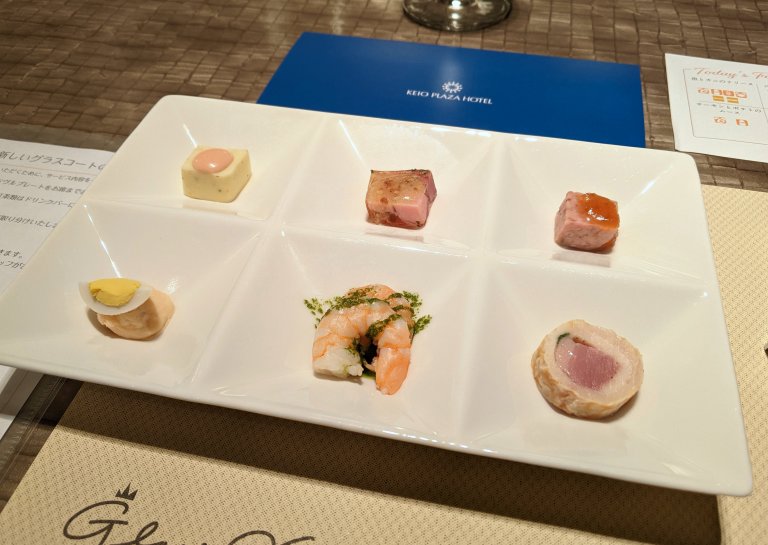 Though the hors d’oeuvres had nothing to do with his goal, he could not deny that their delicate and complex flavors were a tribute to the restaurant’s penchant for quality meals. They made him feel slightly ashamed that he’d only come to eat Cup Noodle dishes, but at the same time, he was even more excited to taste what kind of fancy fare would come out of their Cup Noodle collaboration. Once he’d finished the hors d’oeuvre​ (which didn’t take long because he could eat them all in one bite), he proceeded to the buffet area, where it was easy to find the Cup Noodle dishes on offer. There were four meal items and two desserts, so Mr. Sato started with the savory items first. 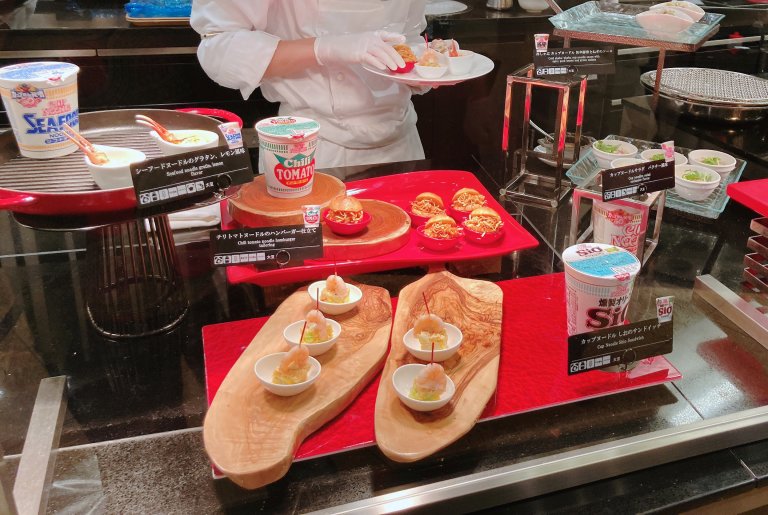 The four dishes were: The Cup Noodle Cilantro Salad… 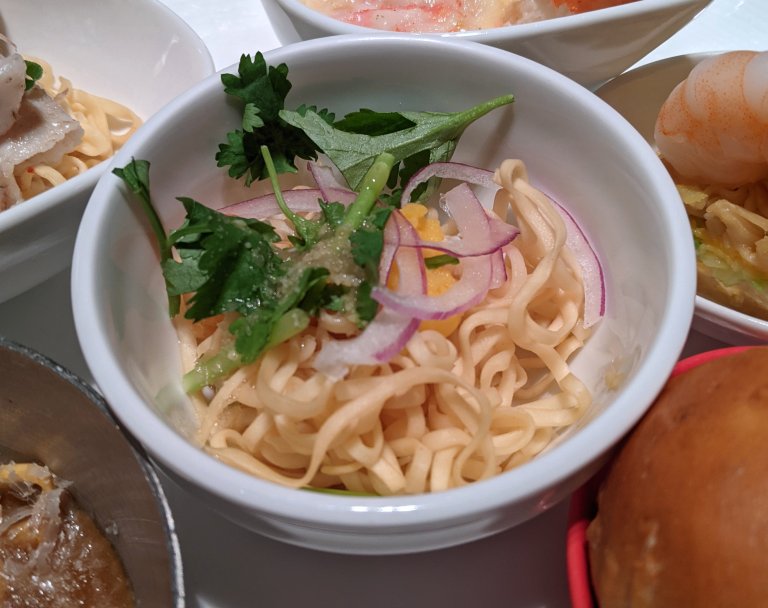 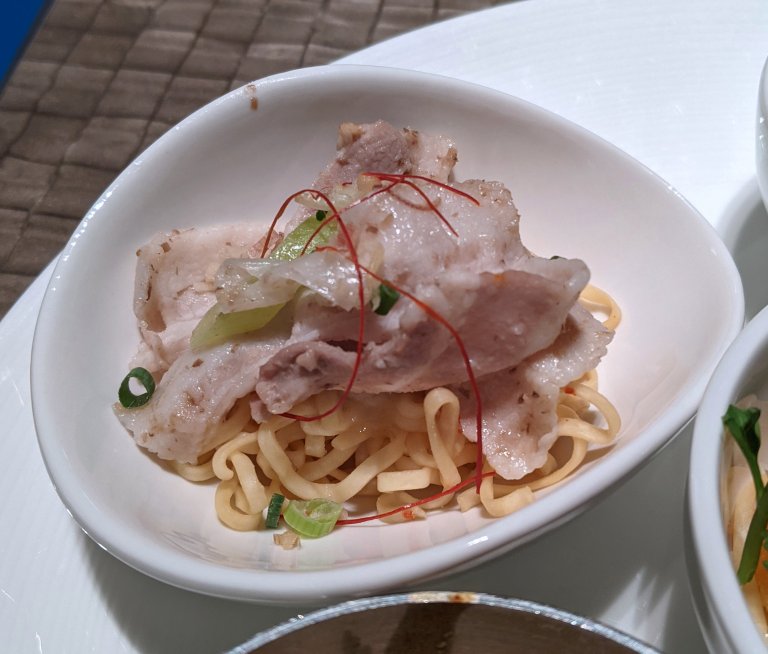 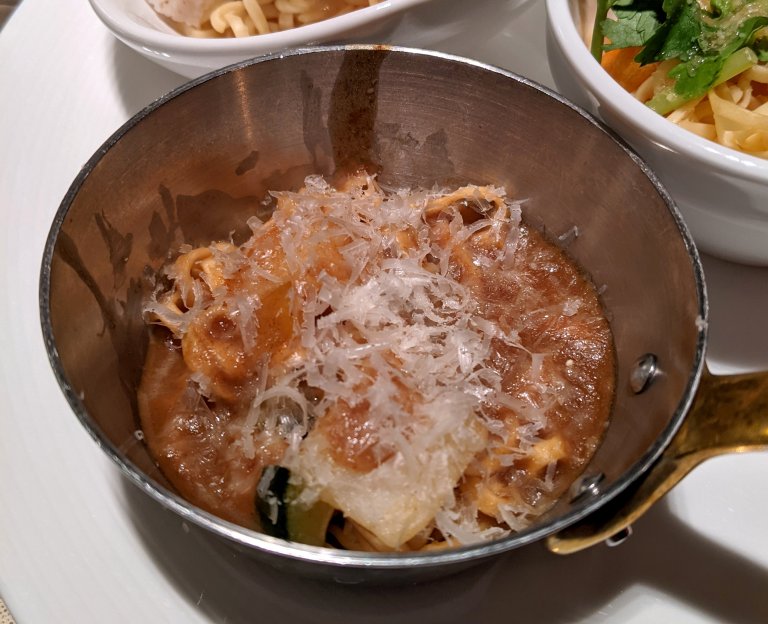 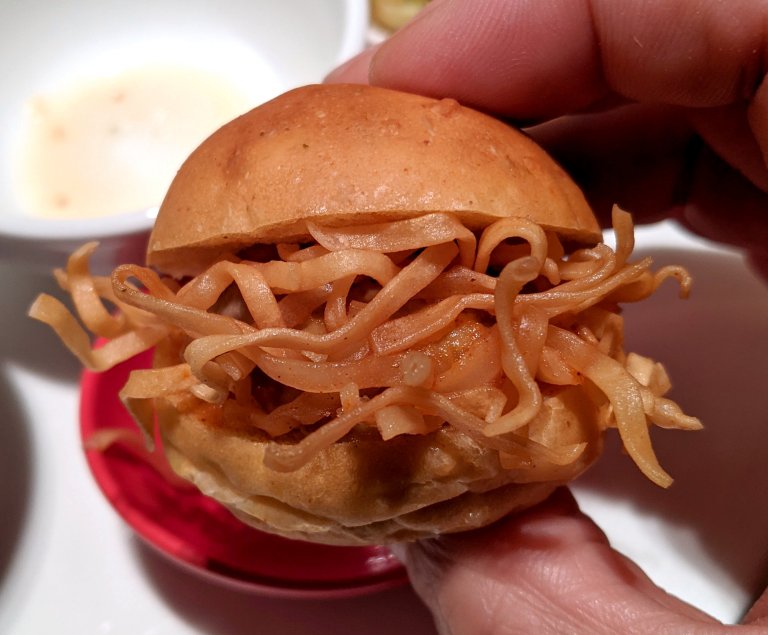 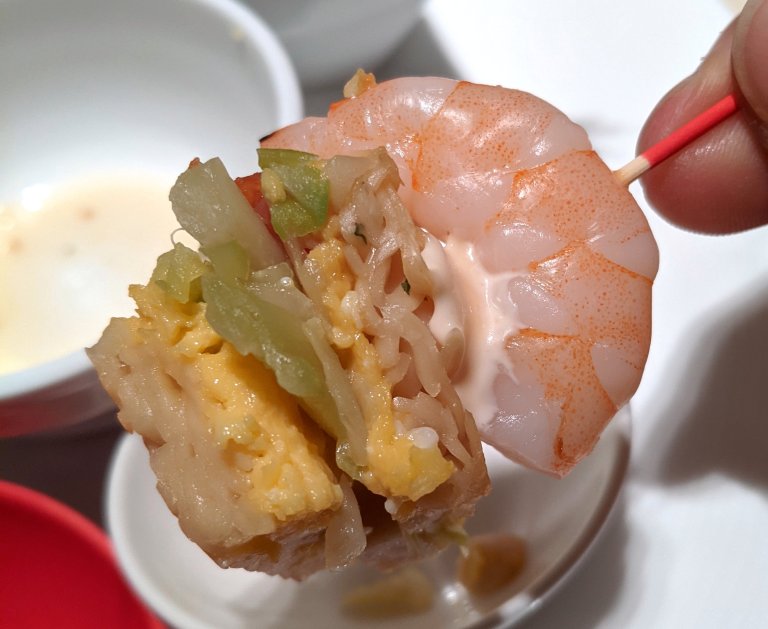 …and the Lemon-flavored Seafood Noodle Gratin. 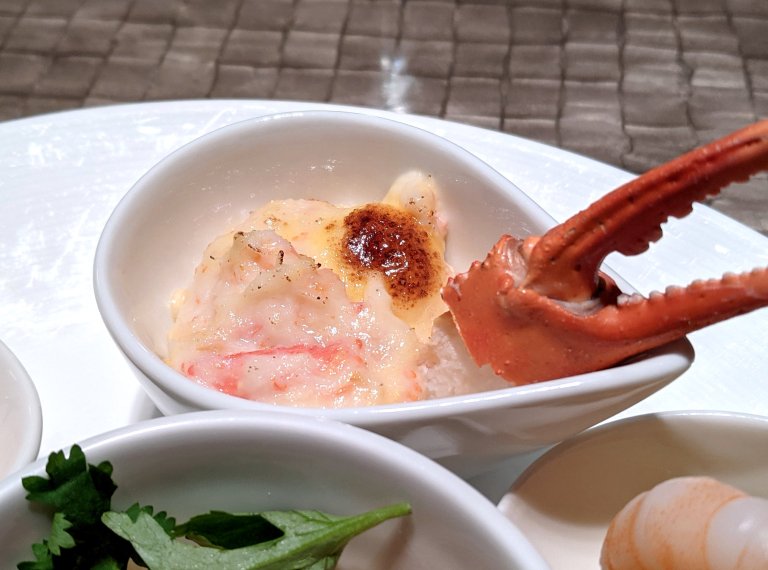 To say nothing of how they looked, their tastes were utterly shocking. All of them both preserved the flavors of our favorite Cup Noodle varieties and elevated them into something suitable to be served at a high-end restaurant. Each possessed a fantastic depth of flavor and delicacy, and of course an astounding degree of culinary inventiveness. The sandwich made with the salt-flavored Cup Noodle, for example, used noodles in place of the bread. It must have taken forever to get them to look like tiny square pieces of white bread! 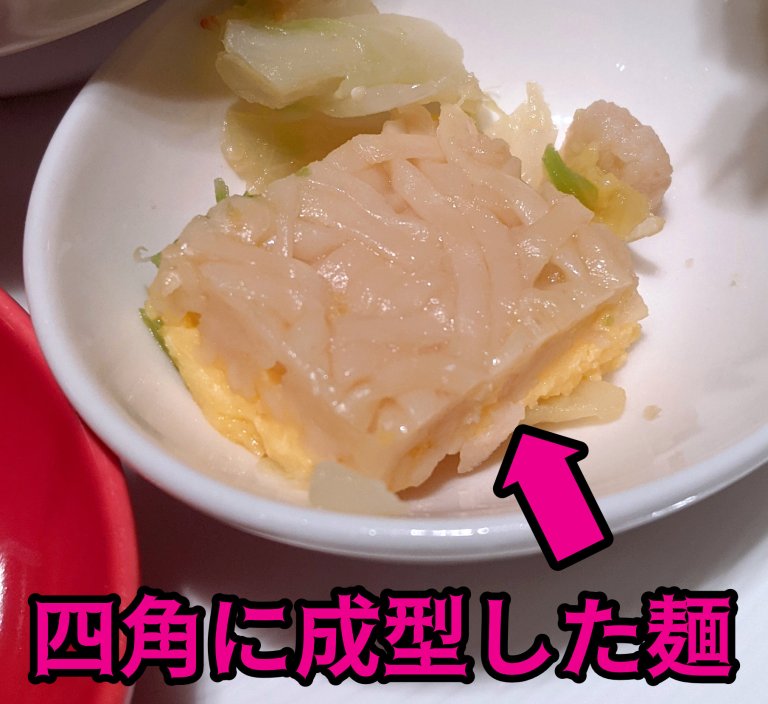 The dish Mr. Sato loved the most, though, was the curry that combined Cup Noodle’s Cheese Curry flavor with the Keio Plaza Hotel’s legendary curry recipe to make a curry noodle dish so good, you’ll think you’ve died and gone to heaven. Every bite is full of the lively fruity aroma of the curry mixed with a light sweetness and the rich flavor of cheese. 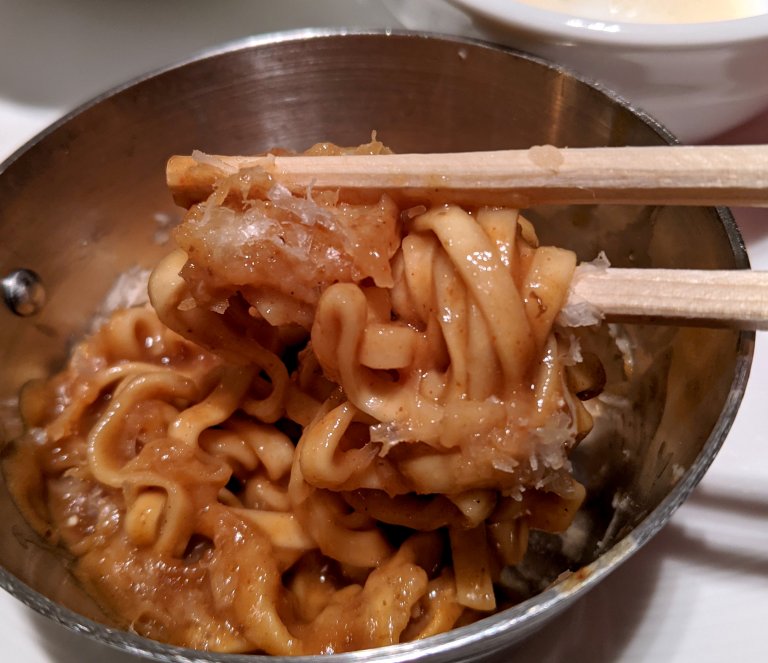 It was truly heavenly. Mr. Sato would even go so far as to say that, among all of the curry noodle dishes he’s ever eaten in his whole life, this one is absolutely the best. It was so good that he asked the chef if this was a dish he could recreate at home, but he was disappointed to learn that it’s somewhat difficult to accomplish in a layman’s kitchen. However, the chef was kind enough to give us a pro-tip: adding chutney and finely shredded Parmigiano-Reggiano cheese to any store-bought curry elevates it to a higher degree of sophisticated deliciousness. If you have someone you want to impress with some MasterChef-level cooking, you’ll want to try that! Of course, after tasting such delectable morsels, Mr. Sato couldn’t forget the two Cup Noodle desserts available. In fact, he was very interested in how you could make Cup Noodle into a sweet. 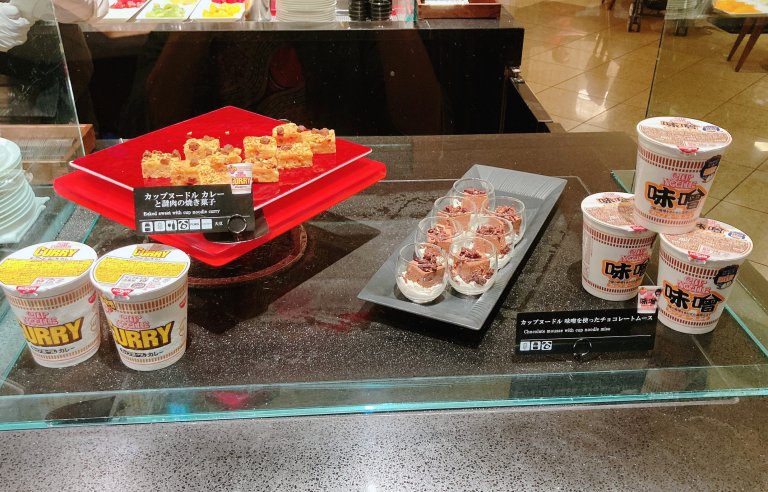 The first was a chocolate mousse that made use of the Cup Noodle Miso flavor. 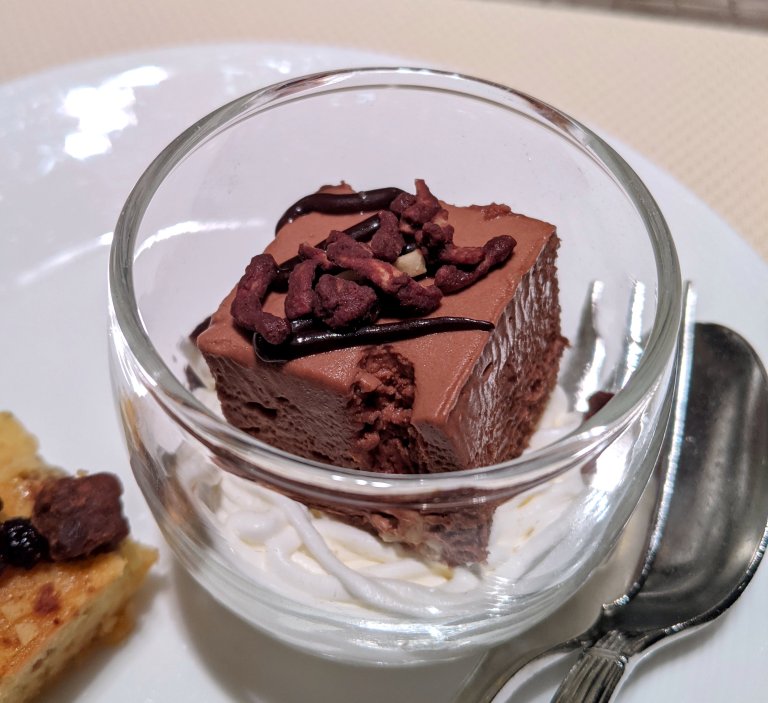 The second was a baked dessert that was made with the Cup Noodle Curry and Mystery Meat flavors.

▼ The arrows are pointing to the mystery meat pieces. 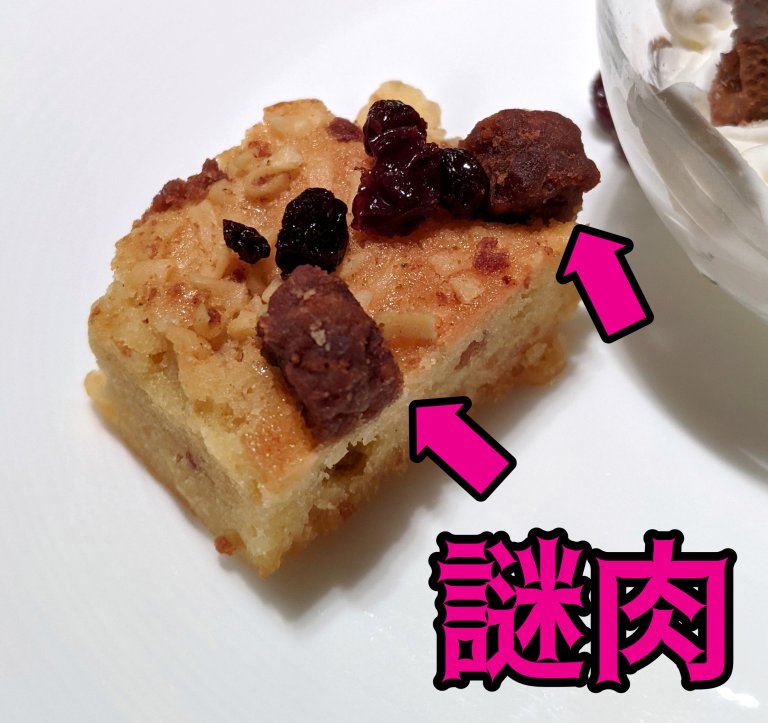 Mr. Sato was most intrigued by the latter. Why use the Mystery Meat in a dessert? How could that possibly taste good?! Mr. Sato hesitantly took a bite…and found that it was actually quite tasty! The Mystery Meat pieces must have been baked in the oven because they were much crunchier than usual. Eating them as a topping on a dessert actually felt similar to eating chocolate chips. They made an excellent accompaniment to the soft pound cake-like sweet. 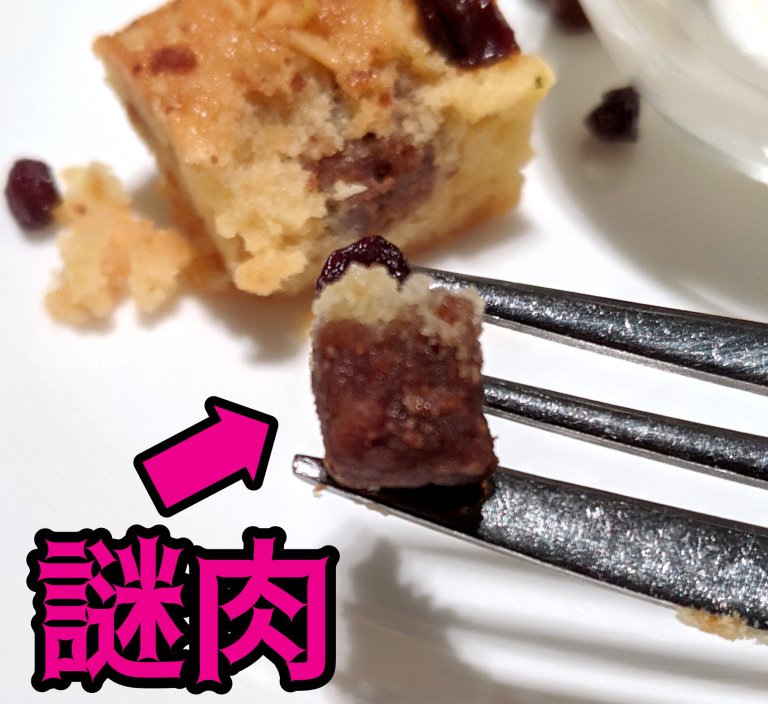 These menu items really are something special! If you want to try them out before they’re gone on August 31, make sure you make a reservation before you go, as you can’t get in without one. It’s a lot harder to get in on the weekend, too, so if you can, we recommend you go for a weekday lunch instead.  They have plenty of other, non-Cup Noodle dishes, of course, so it’s well worth the hefty admission tag of 5,800 yen (US$52) for lunch and 7,800 yen for dinner! Restaurant information Super Buffet Glass Court / スーパーブッフェ「グラスコート」 Located inside Keio Plaza Hotel Tokyo / 京王プラザホテル東京 Address: Tokyo-to Shinjuku-ku Nishi-Shinjuku 2-2-1 東京都新宿区西新宿2-2-1 Open 11:30 a.m.-3 p.m. for lunch (11 to 3 on weekends), 5-9 p.m. for dinner Website Images © SoraNews24 ● Want to hear about SoraNews24’s latest articles as soon as they’re published? Follow us on Facebook and Twitter!