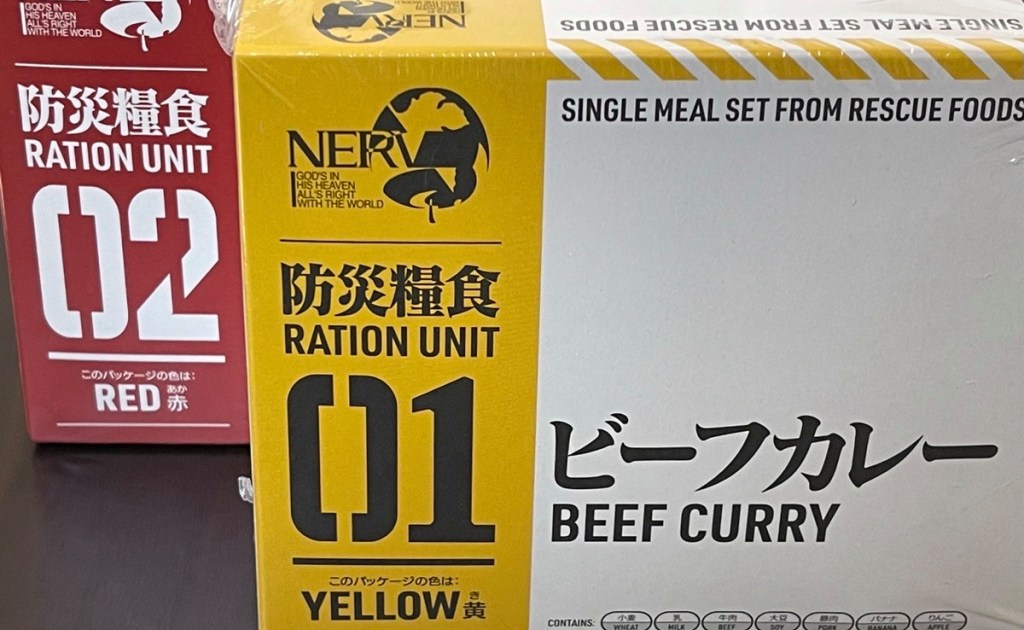 Ever wonder what Tokyo-3 does for dinner when they have to evacuate for an Eva-versus-Angel fight? One of the ways Evangelion sets itself apart from other anime is by taking an unflinching look at the mental trials and tribulations a teenage mecha pilot tasked with defending humanity would face. But life is no picnic for […] 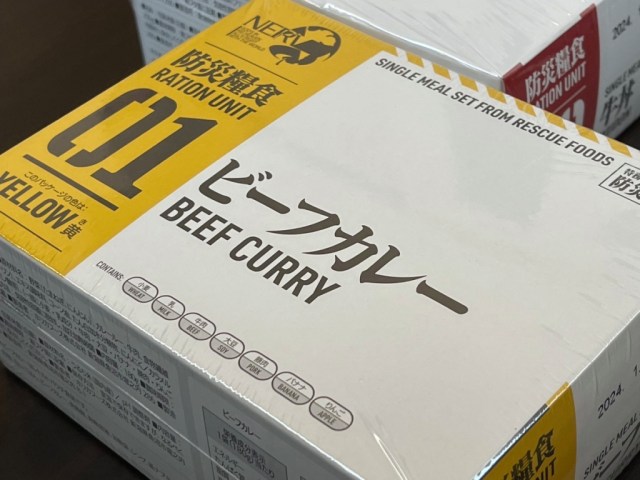 Ever wonder what Tokyo-3 does for dinner when they have to evacuate for an Eva-versus-Angel fight?   One of the ways Evangelion sets itself apart from other anime is by taking an unflinching look at the mental trials and tribulations a teenage mecha pilot tasked with defending humanity would face. But life is no picnic for Eva’s civilian population either, as the city of Tokyo-3 gets turned into a battleground in just about every episode/movie installment. The regular rhythm of evacuations means residents of Tokyo-3 spend a lot of time away from their kitchens, and so Nerv, the organization leading the fight against the invading aliens, obviously needs to stock shelters with food for evacuees to eat, and since you can now buy Nerv rations in the real world too, we picked up a few packs to try for ourselves. 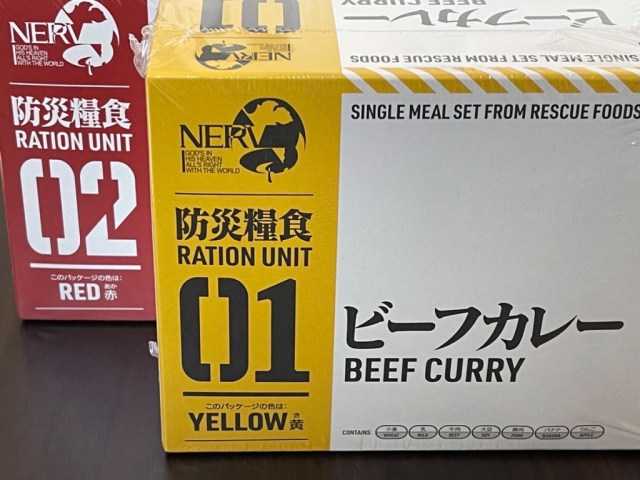 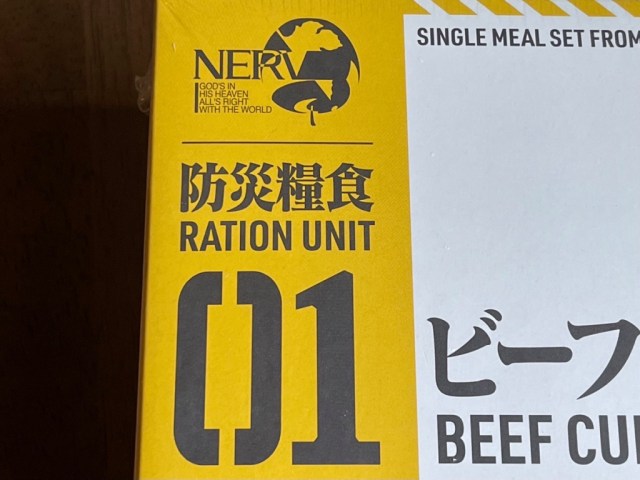 Each ration pack contains two food containers, one with rice and one with a topping. For example, the Evangelion Ration Unit 01 topping is beef curry, and Ration Unit 02 is gyudon (beef bowl) toppings. 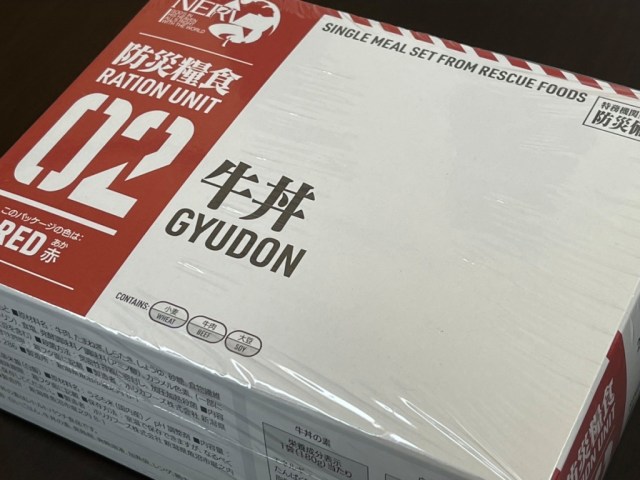 Open up the box (but be careful not to tear it, as we’ll explain in a second), and you’ll find the rice comes in its own container, with a font and graphic design that fits perfectly with the Evangelion anime’s on-screen aesthetic. 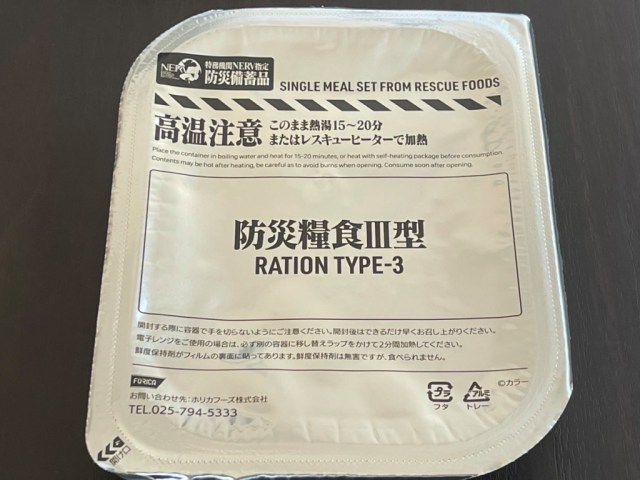 The toppings, meanwhile, are in their own vacuum-sealed pouch. 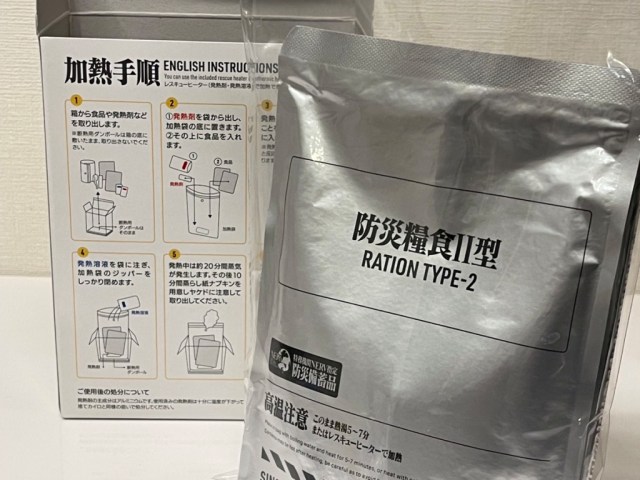 Since these are legitimate emergency rations, they’re usable even if you’re stuck someplace without water, electricity, or any sort of heating or fuel for a cooking fire. So how are you supposed to cook them? Each ration kit comes with an exothermic heating agent packet, sealed inside the pouch with 発熱剤 written on it. 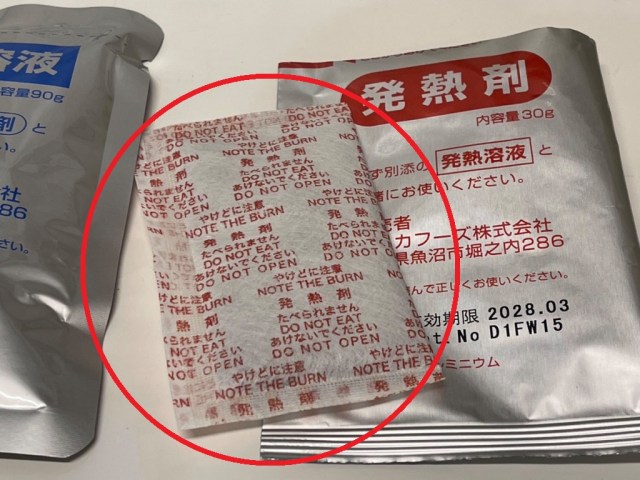 Take the packet out of the pouch, then place the packet at the bottom of the clear plastic heating bag that also comes with the kit. Then put the rice container and topping pouch into the bag and place the bag back inside the box, which is heat insulated (that’s why we said not to tear it). There’s also a liquid heating agent pouch, marked 発熱溶液. Open the pouch and pour the contents into the clear plastic heating bag, then close the bag’s Ziploc-like top. 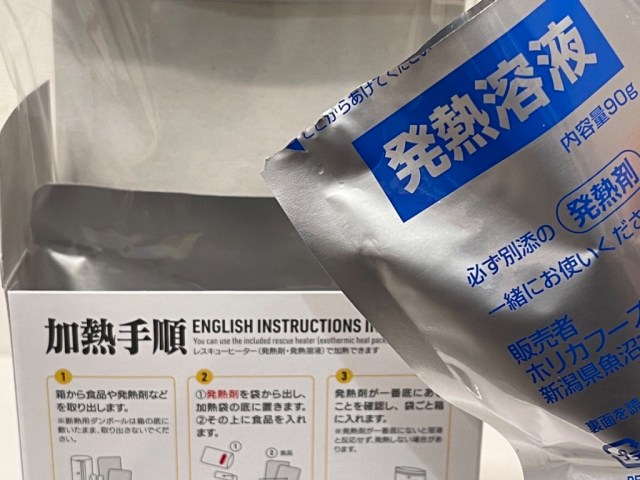 The heating agents will start working right away, and you’ll see moisture form inside the heating bag and steam escaping from its venting slot. 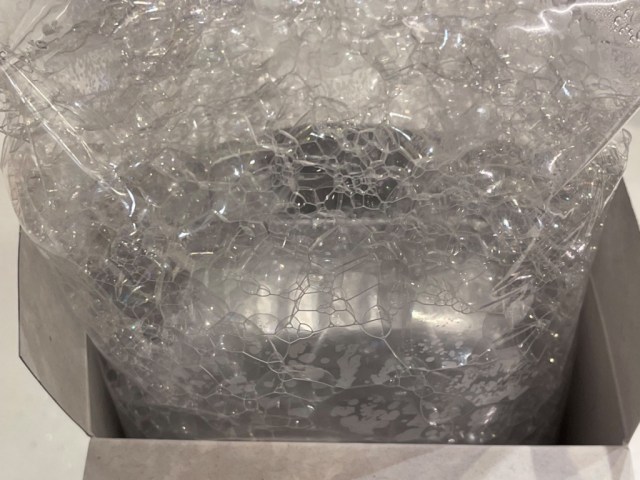 Then all that’s left to do is sit back and wait for the cooking process, which takes about 30 minutes, to be complete.

▼ As noted on the box, there are also English instructions inside. 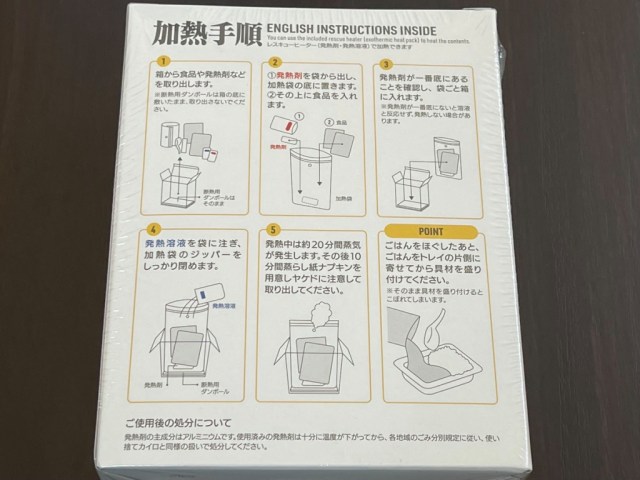 As weird as it felt cooking without turning on an oven, stove, or microwave, half an hour later, our meal was ready to eat! 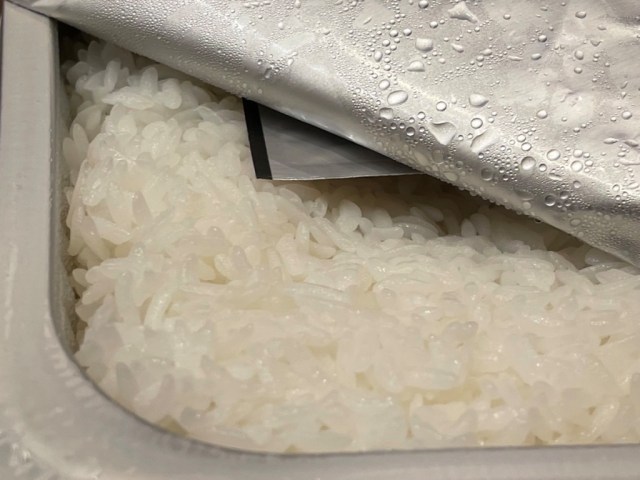 Peeling back the covering for the rice container, we were greeted by hot, freshly cooked pearly white grains, to which we quickly added the contents of the beef curry topping pouch. 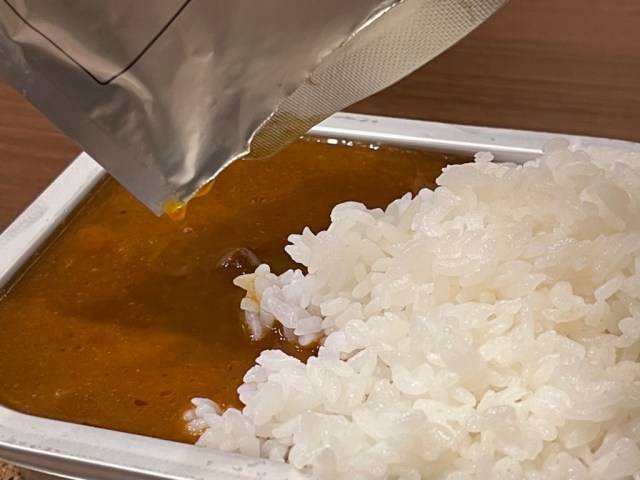 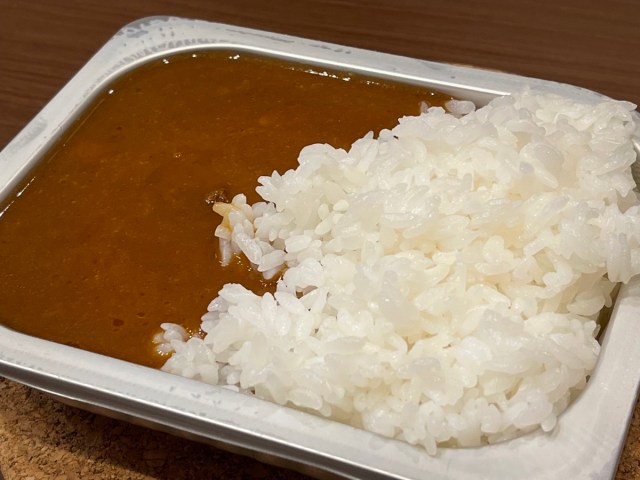 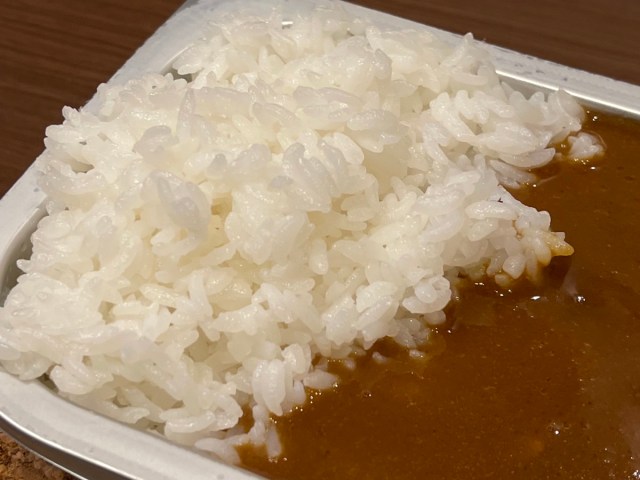 The kit even comes with a spoon and paper napkin, because when you’re running out of your house because aliens are attacking, you probably don’t have time to worry about grabbing cutlery to take with you. 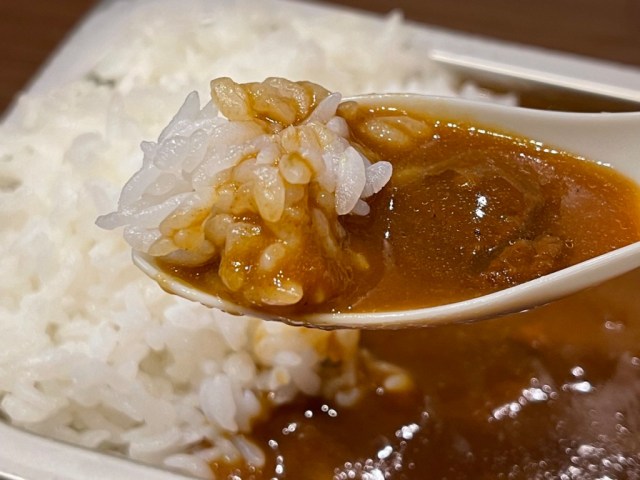 So how does it taste? As with just about any instant rice, it’s not quite as fluffy and flavorful as a batch made in a rice cooker, but it gets the job done. After mixing it with the curry roux, though, we found the resulting combination tasty and filling, just the sort of thing to help fortify your body and mind during tough times. 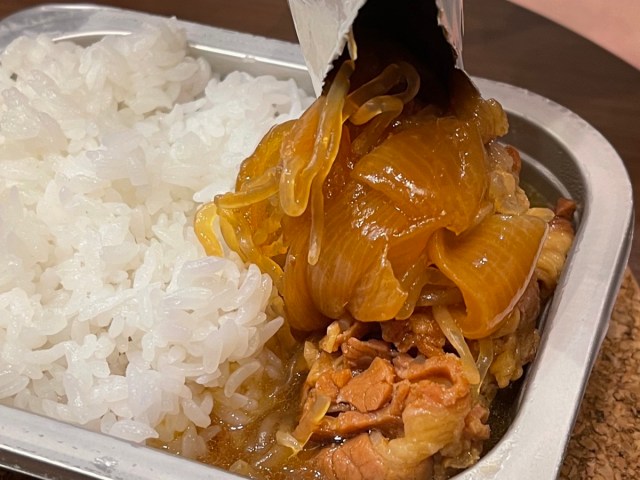 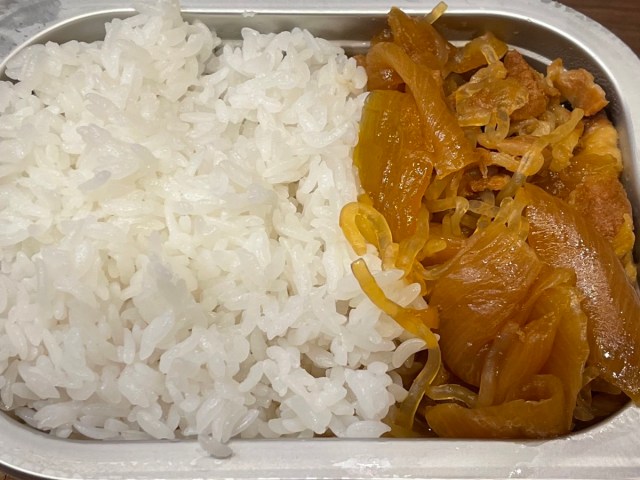 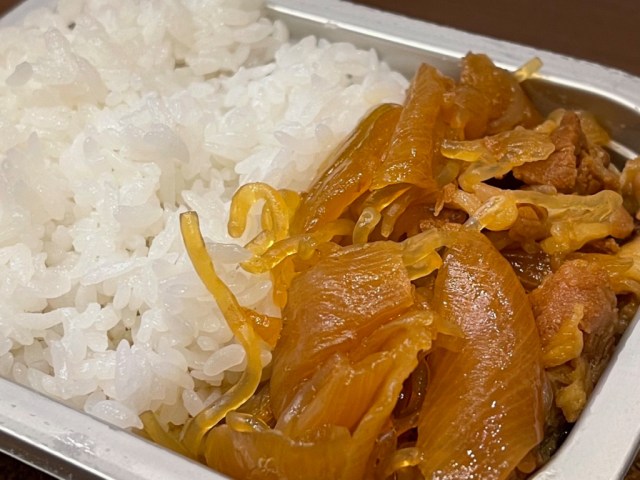 We also got to try out the Evangelion ration beef bowl, and here again they’ve done a great job with the toppings. The simmered beef and onions are more heavily seasoned than what you’d get with a regular order at, say, Yoshinoya, and make for a great combination with the rice. 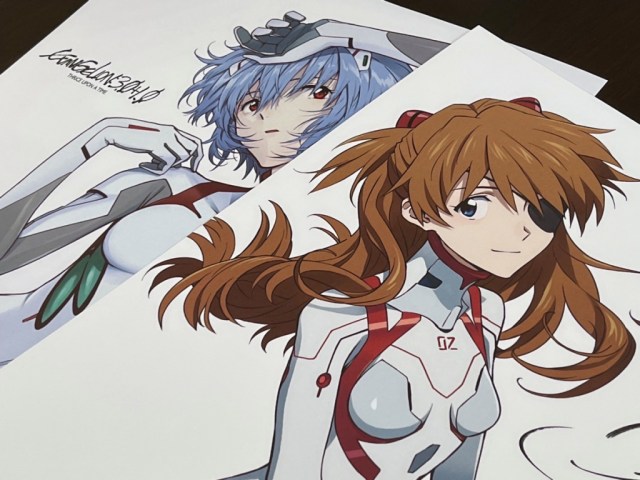 With the Evangelion: 3.0+1.0 Thrice Upon a Time movie currently playing in Japan, many theaters are selling the Eva rations in their attached gift shops, and they can also be purchased via the online Evangelion Store and Forica’s website (here and here, respectively). And if you’d rather wait to eat them until you’ve seen Thrice Upon a Time for yourself, don’t worry, because they’ve got a shelf-life of three years and six months. Photos ©SoraNews24 ● Want to hear about SoraNews24’s latest articles as soon as they’re published? Follow us on Facebook and Twitter!