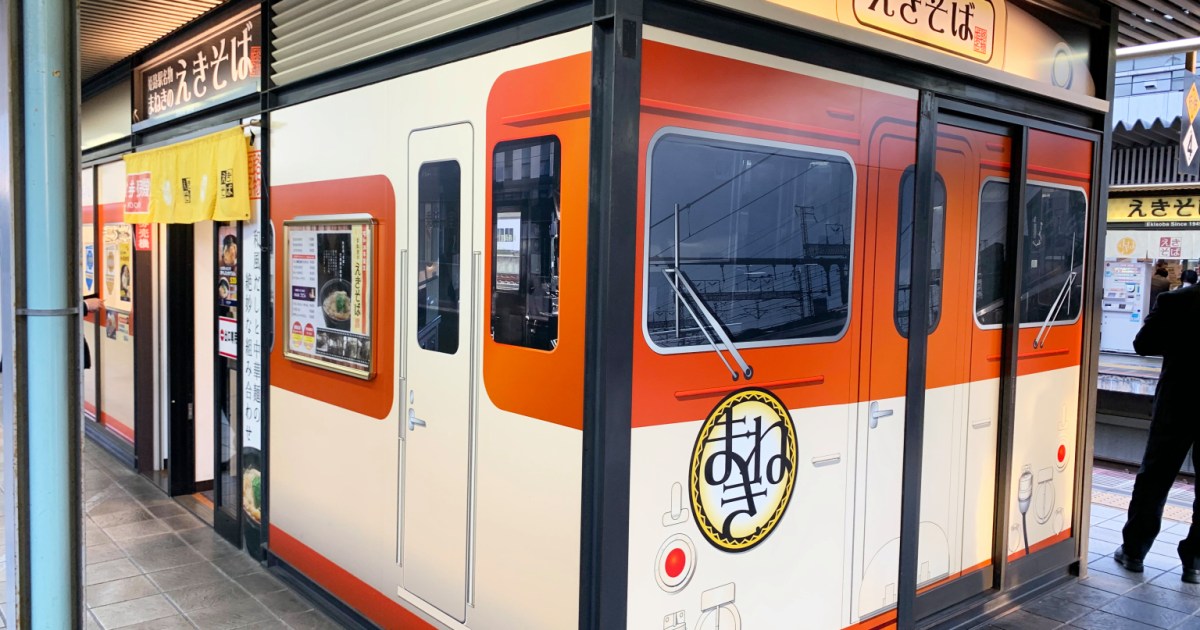 Over 70 years in service, with a very unusual type of noodle on the menu that was developed after World War II.  Just the other day, noodle lovers were shook by the news that Tokiwaken in Hokkaido had closed, following the sad death of its 84-year-old owner, Mamoru Nishino, in February. This standing-style soba restaurant, […] 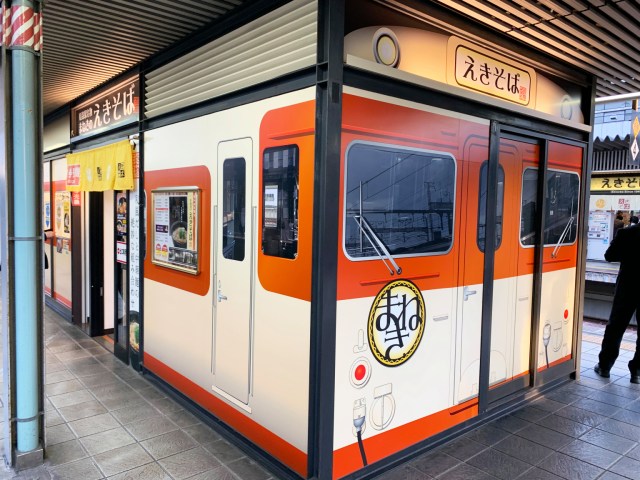 Over 70 years in service, with a very unusual type of noodle on the menu that was developed after World War II.    Just the other day, noodle lovers were shook by the news that Tokiwaken in Hokkaido had closed, following the sad death of its 84-year-old owner, Mamoru Nishino, in February. This standing-style soba restaurant, located at Otoineppu Station, had been in business since 1933, and according to rail enthusiasts, it was the best ekisoba (train station soba) restaurant in all of Japan.

▼ Our reporter Seiji Nakazawa was lucky enough to have visited the restaurant once while it was still operating, and he can attest to its delicious noodles.

With the establishment now closed, there’s an opening for another restaurant to take its place in the top spot, and according to reports, a restaurant called “Ekisoba” at Himeji Station is already being hailed as the nation’s best. Seiji was keen to find out if the restaurant really does have what it takes to be crowned best ekisoba in Japan, so he hopped on a train and headed out to Himeji, where he found the restaurant located on two platforms: 5-6 and 7-8 on the Sanyo Main Line.

▼ With an exterior that looks like the front of a local train, this eye-catching soba stand is hard to miss.

Like Tokiwaken, this soba restaurant has been in business for decades, serving customers since 1949. 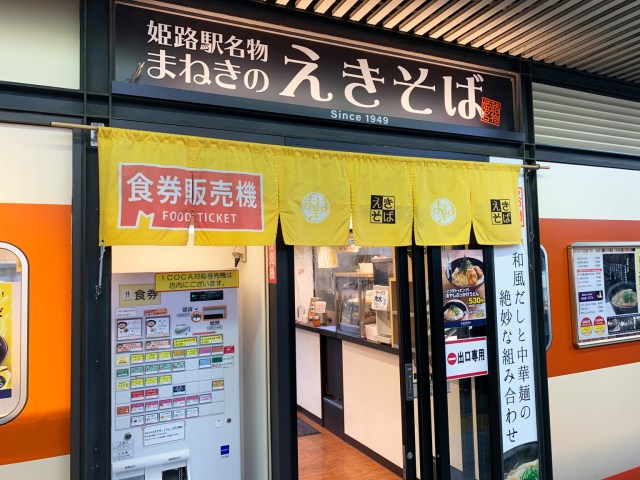 As one of Japan’s leading terminal stations for the Shinkansen, Himeji Station is a busy transport hub where time to eat can be limited, so speed and flavour is essential to any restaurant’s long-term survival on the premises. Seiji wanted to see how they would perform on these fronts, so he placed an order for Tempura Ekisoba for 380 yen (US$3.47) at the machine by the front door and went inside to wait for his meal to arrive. The soba was delivered within a couple of minutes, earning it a gold star on Seiji’s approval rating, but when it arrived, it looked very different to the soba served at Tokiwaken. Both the broth and the noodles themselves were much lighter in colour compared to Tokiwaken, where the darkness of the ingredients led to their noodles being dubbed “black soba“. 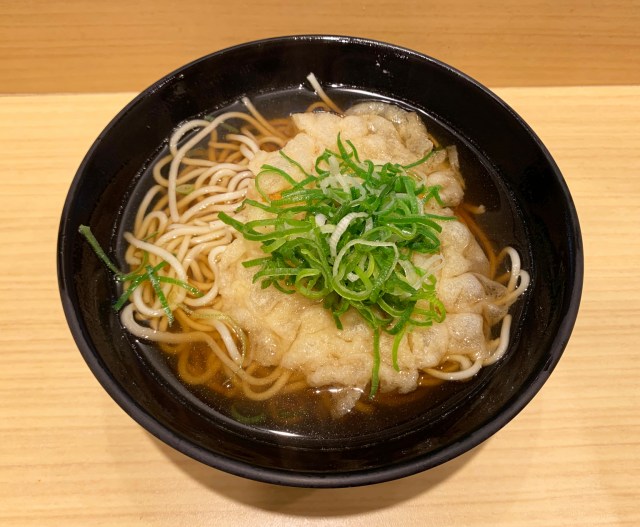 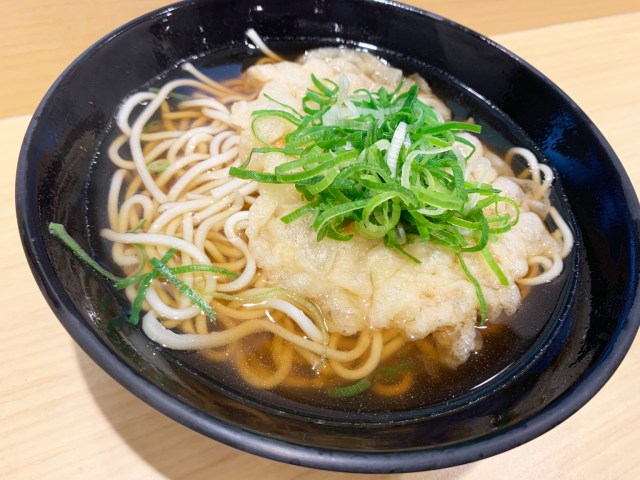 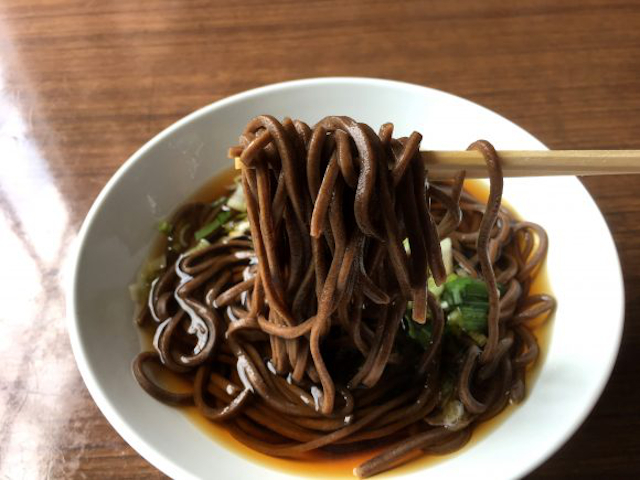 Ekisoba isn’t trying to imitate Tokiwaken, though, and regardless of what the meals look like, any comparison between the two all comes down to taste. So Seiji picked up his chopsticks and dipped them in for a closer look at what was inside.

▼ The fried tempura topping didn’t look too different from anything you’d find at a regular soba restaurant, and the broth was well-flavoured. 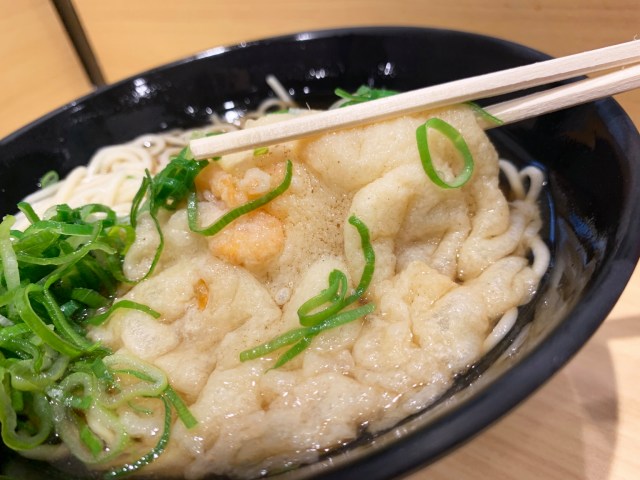 ▼ However, what really caught Seiji’s eye were the noodles. 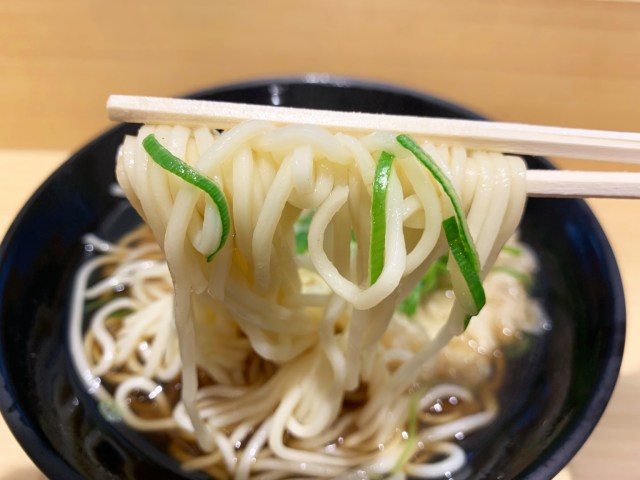 Soba noodles usually have a speckled, brown-grey look to them, so seeing these bright white noodles was a bit of a surprise for Seiji. They looked more like the noodles you’d find in a bowl of ramen, but they didn’t have the same smooth texture. Instead, the texture was similar to soba noodles, which confounded Seiji’s taste buds. 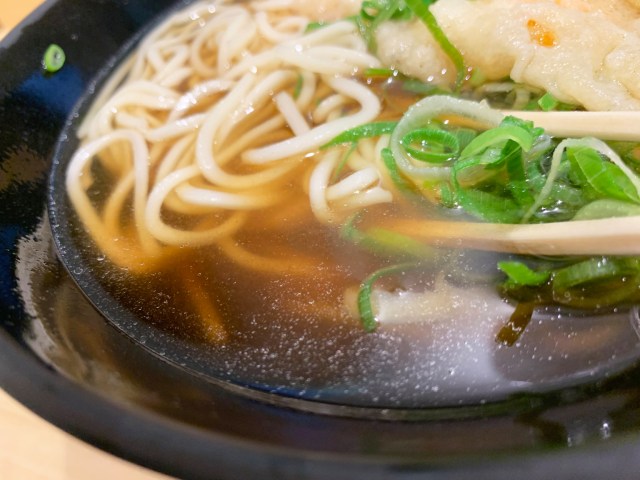 The noodles weren’t like any Seiji had eaten before, so he called up Maneki Shokuhin, the company that runs the store, to find out more about the soba’s origins. They told him that the restaurant was founded just four years after World War II, at a time when food was scarce, so the soba made at that time contained a blend of konnyaku flour and soba flour. Through trial and error, the noodles were developed further in the years that followed, leading them to create a Chinese noodle which, when paired with Japanese broth, makes for an unusual mismatch. 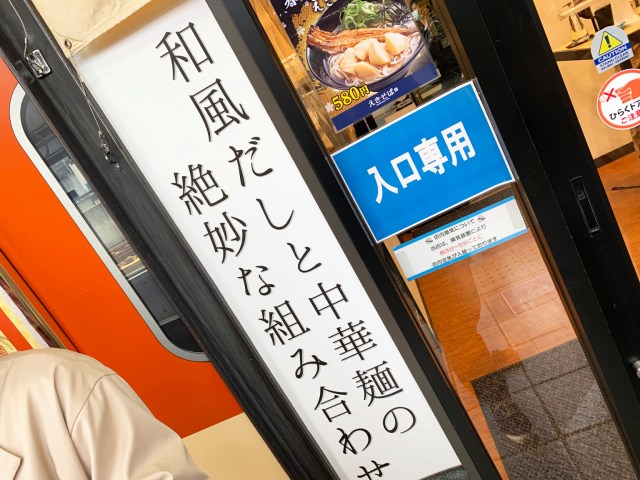 Seiji agrees it was an unusual mismatch but an exquisite combination, and that’s when he realised the “best ekisoba” accolade might not just be reserved for places serving up a good bowl of soba, but rather a good one that’s unusual as well. In the end, though Seiji’s heart remains with Tokiwaken for its taste and gorgeous rural location, Ekisoba is a truly worthy contender for the title of best train station soba in Japan. It’s a new and exciting noodle experience packed with delicious flavour, and with 72 years of history behind it, it’s a meal that’s definitely worth trying, especially for those wanting to take their taste buds on a journey back to an era when soba workers used to go to extreme lengths to deliver noodles to their customers. Restaurant Information Ekisoba JR Himeji Station Conventional Lines Branch / えきそば JR姫路駅在来線上り店 Address: JR Sanyo Main Line Himeji Station Platform 5/6 JR山陽本線「姫路」駅構内5・6番線ホーム Hours: 6:00 a.m.-11:00 p.m. (Currently closing early at 9:00 p.m. until 21 April due to coronavirus restrictions) Images © SoraNews24 ● Want to hear about SoraNews24’s latest articles as soon as they’re published? Follow us on Facebook and Twitter!