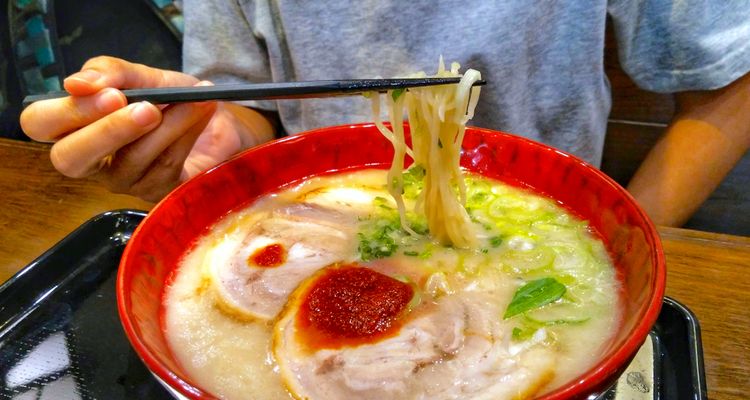 If you're a fan of ramen, you've no doubt heard the name "Ippudo," "Ichiran," or "Ikkousha" before. These ramen restaurants are not only the three of the most successful Japanese ramen chains outside of Japan, but also share a common birthplace (Fukuoka) and serve the same style of ramen—Hakata tonkotsu ramen. Just how did Hakata ramen take Japan—and the world—by storm? Read on to find out, as well as get some tips on the best places to eat Hakata ramen in Fukuoka.

Ramen is quickly becoming the most popular Japanese food across the world. Indeed, a survey conducted by the Japan Tourism Agency of international visitors to Japan in 2019 found that when asked about their most satisfying meal in the country, ramen was cited even more than sushi, with a full 19 percent of visitors saying it was their best meal. Outside of Japan, too, ramen restaurants have begun springing up in cities around the world in recent years in what can only be described as a "ramen boom." The world of ramen is filled with variety, with noodles of many different textures and thicknesses, as well as broths with numerous flavors and consistencies. Japanese ramen is diverse and exciting, with many different regions and cities boasting their own unique style. However, despite the plethora of ramen varieties present in Japan, if you've eaten at an authentic Japanese ramen restaurant outside of the country, the odds are fairly good that you ate a specific type of ramen called "tonkotsu" ramen (pork bone ramen), or, even more specifically, "Hakata tonkotsu ramen." The reason this chance is so high is that three of the most successful international ramen chains hail from the same place: Fukuoka's Hakata ward.

What Makes Hakata-Style Ramen So Popular?

The Flavors Of Hakata Tonkotsu Ramen

Hakata ramen is characterized by its thick, milky, silky tonkotsu (pork bone) broth and thin, delicate noodles. While other styles of tonkotsu broth often include chicken or other types of bones, Hataka's ramen is typically made exclusively with pork bones, which are boiled at a high temperature for long hours to create a cloudy, thick, fatty broth. Toppings often include pickled red ginger to combat the strong pork flavor, chashu (braised pork belly), white sesame, and minced Hakata "banno negi" (green onions). The noodles used in Hakata-style ramen are super-fine, straight noodles that are typically served in small, 100 gram portions. Instead of starting with a huge serving of noodles in the bowl, diners typically order a second "kaedama" portion of noodles to eat with the remaining soup once the first portion is finished.  As the noodles are so thin and delicate, this system ensures that the noodles can be eaten while fresh, without turning mushy from sitting in the broth for too long.

The History of Hakata Ramen

Hakata ramen is so named because it was born in Fukuoka's Hakata ward, one of the central business areas and transit hub of the city. The dish as we know it today traces its roots back to 1946, when a cook named Shigeru Tsuda set out to sell Chinese-style noodles like those he had eaten as a soldier stationed in China. Taking influence from a traditional Ainu (indigenous Japanese) soup, Tsuda developed a cloudy pork bone-based soup and created a type of ramen that soon grew to be known as Hakata ramen. A few years later in 1952, a different type of ramen was born at a restaurant called Nagahamaya in Hakata's fishing port. Called "Nagahama ramen," this style of ramen featured extremely fine noodles that were designed to cook quickly for the fishermen customers who were in a hurry. These noodles eventually spread to Hakata ramen as well, along with the "kaedama" system of getting a second helping of noodles to finish of the leftover soup.  Today, Nagahama ramen and Hakata ramen are basically indistinguishable, and most Japanese people have only heard of the latter.

From Hakata to the World: The Rise of Ippudo, Ichiran, and Ikkousha

It's a bit puzzling why Hakata ramen was the quickest to spread around the world. Indeed, other types of ramen such as classic Tokyo shoyu ramen have a longer history and seemingly had more chances to spread to other countries due to the higher concentration of visitors to Tokyo. However, it seems that ramen enthusiasts from Fukuoka, for whatever reason, are the most gung-ho about spreading their special type of ramen to the rest of Japan and the world. And it has worked! Thanks to the brands below, Hakata ramen has become one of the most common types of ramen to see outside of Japan.

In 1985, a ramen restaurant called Hakata Ippudo opened in Fukuoka serving delicious Hakata ramen. For 9 years, Ippudo operated as a single restaurant until 1994, when the opportunity to open a second shop inside of the newly-created Yokohama Ramen Museum arose. Ippudo thus came to represent Hakata ramen to eastern Japan and soon became a huge hit in Tokyo and the surrounding area. The brand finally went international in 2008, opening a restaurant in New York City, and its popularity has exploded from there. Today, Ippudo has more than 100 international branches in 15 countries across the globe and continues to expand and develop as a brand. Ippudo began by serving a classic Hakata tonkotsu ramen, which remains unchanged on the menu today. However, many branches of the restaurant also feature their own unique bowls of ramen that can only be enjoyed at that location, such as the "Chiba Red" and "Chiba Black," Ippudo versions of local ramen only available at the Chiba location; or the "Shirunashi Karakamen," a soupless ramen only available at the locations in Nagoya. This makes it fun to visit various Ippudo restaurants in order to try the unique flavors on offer.

The first Ichiran Ramen restaurant opened in 1960 under a different name, but the brand didn't take its current form until 1993 with the opening of an Ichiran Ramen restaurant in Nanokawa, Fukuoka. This was followed by rapid expansion in the Fukuoka area, as the brand gained popularity for its unique ordering system and individual dining booths—the original socially-distanced ramen-eating system. Ichiran soon spread to the rest of the country in the early 2000s, and the first international restaurant was finally opened in Hong Kong in 2013. Today, there are a total of seven international locations in Hong Kong, New York, and Taiwan and we can only assume that there are more branches on the way! Ichiran ramen serves just one type of ramen, its classic Hakata tonkotsu ramen topped with a distinctive red dollop of secret spice paste. However, the brand is known for its unique ordering system, which allows for complete personalization of each bowl of ramen by way of an order sheet filled out by each customer. The sheet specifies everything from the firmness of the noodles, to the toppings, to the amount of fat desired in the soup. This ultimate customization paired with the private "ramen focus booths" is what sets the brand apart and leads to long lines outside many stores during mealtimes.

HAKATA IKKOUSHA: The Newcomer Spreading Quickly Across the Globe

The first HAKATA IKKOUSHA was opened in 2004, when a group of 3 Hakata locals embarked on a mission to spread authentic Hakata ramen to the world. Before opening restaurants in other countries, however, it was important to the founders to establish themselves in their hometown of Hakata. They did just that, quickly gaining popularity in Fukuoka before spreading to other parts of Japan. The first international HAKATA IKKOUSHA was finally opened in Jakarta, Indonesia in 2011 and the brand has since expanded to a current 48 international branches in 9 different countries, from Australia to China to Brazil. The ramen served at HAKATA IKKOUSHA is a classic, old-fashioned Hakata tonkotsu ramen that stays true to the flavor loved by Hakata locals. However, the brand also offers a spicy "Red" version and a charred garlic-infused "Black" version of the ramen as well. Whatever you choose, you can't go wrong with the options here.

Where Can I Eat Hakata Ramen in Fukuoka? Five of the Best Restaurants in the City

Considered to be the original restaurant serving Hakata ramen, Hakuryuken is the place to go to experience the flavor of Hakata ramen as it was more than 70 years ago. The restaurant isn't in the most exciting part of town, being located in a quiet residential area, but it is worth the visit just to say you've eaten the ramen that started it all. Note that the shop is only open for lunch and is closed on Monday and Thursday.

According to the user reviews on the Japanese site Ramen Database, Hakata Isso is the best ramen shop in Fukuoka. Opened in 2012 by a pair of brothers, Isso now has 3 locations in Fukuoka City. The menu is simple, and the only ramen on offer is an outstanding version of a classic Hakata ramen. If you want to experience the best Hakata ramen in Hakata (and presumably the world), this is the place to check out.

Mentioned above as one of the three Hakata ramen brands spreading the gospel of Hakata ramen throughout the world, Hakata Ikkousha's Main restaurant in Hakata is definitely worth a visit. Located just a few minutes from Hakata Station, this is a great place to experience an outstanding bowl of classic Hakata ramen.

Ganso Nagahamaya is the birthplace of Nagahama ramen, as mentioned above. The original bowl of Nagahama ramen that was first served nearly 70 years ago is still on offer and shouldn't be missed by any ramen fanatic.

Located on the street level of the office tower housing the headquarters of Ichiran ramen, this is one of the coolest Ichiran locations in Fukuoka. The restaurant is open from the morning until late into the night and is a great spot to grab an excellent bowl of Hakata ramen, whether you're a diehard Ichiran fan or a newcomer to the ramen scene.

Hakata ramen is magical, but that's not the only thing hiding in Kyushu, the region that Fukuoka Prefecture is a part of. Kyushu has some of the best eats around, so if Hakata ramen sounds delicious to you, we think you'll love what the rest of Kyushu has to offer. Check out the official Kyushu tourism website for more information on what's out there in the region. Visit Kyushu Official Website: https://www.visit-kyushu.com/en/ If you want to give feedback on any of our articles, you have an idea that you'd really like to see come to life, or you just have a question on Japan, hit us up on our Facebook, Twitter, or Instagram!